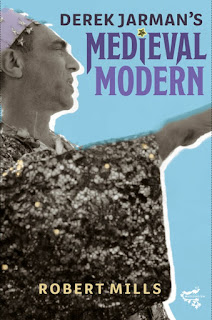 Since his death in 1994, Derek Jarman has tended to remain an uncertain figure in the culture landscape of contemporary British art and film. Still mostly known as a leading avant-garde, artist’s filmmaker, he was also a painter, writer, set designer for theatre and music video, gardener and activist. Part of the same generation as David Hockney, he never attained anything like that other queer artist’s acclaim or fortune, and he worked usually beyond the influence of major cultural institutions, not under the radar exactly, but certainly in his own terms. Because he ranged across media, Jarman can be difficult to pin down and locate in a tidy narrative of contemporary culture, and it is precisely the challenge of that untidiness that is the focus of Robert Mills’s brilliant book on the artist.

As explained in the compelling and succinct Introduction, Derek Jarman’s Medieval Modern is about many things. It is a book about Jarman, but one that differs from all others in its attempt to range across the artist’s multidisciplinary oeuvre. It is also a book about the “medieval,” how we understand this word today and the uses to which it is put. The coinage that Mills uses to such good effect is the “medieval modern,” a multifaceted use of “medievalism” that “disrupts or dissolves the boundaries of art, medium, time and discipline” (1). Mills draws on the idea of the “medieval” as “a fluid and floating category of otherness, one that operates spatially and morally as well as temporally” (1). Thus, Mills partly learns from Jarman that the “medieval” is not bounded by period, rather it is a concept that opens up the many ways of encountering the past that also speak to us in and about the present while pointing to the future, too. As he writes:
The ‘medieval modern’ of my title harnesses the temporal asynchrony that such dialogues between past and present potentially engender. As a thought experiment, it asks what happens when (with Derek Jarman, but also more broadly) we think these categories together. It forces a reflection on the mutually reinforcing differences that separate the medieval from the modern, even as it highlights their potential for overlap and continuity. Medieval with modern; medieval before modern; medieval as modern; medieval not modern – my contention is that all these permutations can be discovered in Jarman’s art. (2)
There is no singular or easy relationship between the “medieval” and the “modern” and Mills resists thinking about them through, for example, a dialectical model. These two signifiers – which are at once ideas, historical periods, artistic modes, adjectives – rub up against each other all the time, but often in disruptive or even contradictory ways. Jarman’s work helps us to see those disruptions but without a need to sort them out.
The book is organized in four chapters, which cover the breadth of Jarman’s work. Chapter 1, worth discussing a bit more at length here, explores the many ways the medieval comes into view in his films, writing and art. In part, Mills follows Carolyn Dinshaw in thinking about the ways the present “touches” the Middle Ages, and Jarman provides an excellent case study in ways of touching the past. Mills begins with a fascinating discussion of Jarman’s attitudes to religion, specifically medieval Christianity. On the one hand Jarman rails against the sexual repression, homophobia and violent, “‘murderous tradition which still contributes to legislate against us’,” but, on the other hand, medieval religion provided a deep reservoir for his imagination – saints’ lives, for example – often explored for its queer subtexts. What comes across strongly in this chapter is the sheer extent of Jarman’s engagement with the medieval, from reading primary texts (Langland, Chaucer, etc.) to academic criticism (history, art and architectural history, literary criticism), and the many, varied ways the medieval enters his work. Mills is excellent at unpicking the knotty ways the medieval threads throughout Jarman’s work. To take just one constellation of works: a music video for the Pet Shop Boys’ “It’s A Sin” references Carl Theodor Dreyer’s silent film from 1928, La Passion de Jeanne d’Arc; an unrealized script, Bob-Up-a-Down, about sexual repression; his own “Miss Crepe Suzette” drag costume for the 1975 Alternative Miss World; and numerous passing references in the diaries – each of these draws on the history and iconography of Joan of Arc specifically, using her life and story and its reimagining by others to various ends, not always with the same idea in mind.

Towards the end of Chapter 1, Mills explores recent thinking about “queer time,” what Elizabeth Freeman has described as “a visceral sense of the past stubbornly lingering in the present” (29), a refusal for the past simply to go away, or be replaced, in the way linear understandings of time might suggest. According to Mills, Jarman made films that can “usefully be understood as ‘medieval’ when it comes to imagining alternatives to linear or sequential concepts of time” (37). The Garden (1990), Jarman’s exploration of Christ’s Passion, filmed in and around his cottage and garden at Dungeness on the coast of Kent (aka, “Garden of England”), highlights our “sense of estrangement from measured time,” with a soundtrack that at one point highlights the relentless monotony and tyranny of clockwork and its rhythms (35). The story of Christ is interrupted by the measured ticking of the passing of time. Such temporal disruption is also found in Edward II (1991) when a set-piece music-video style scene interrupts Marlowe’s plot (Annie Lennox memorably singing “Every Time We Say Goodbye”). By the end of the film, Mills suggests, there is a feeling of the “medieval” being co-present with the “modern,” without a distinct sense of “then” and “now.”

Chapter 2 continues to develop ideas about time and history, while also pointing to Jarman’s deep engagement with art history. Anachronism becomes a key idea here, not only the strategic ways Jarman appears to run roughshod over strict chronology and period authenticity, but also the way anachronism poses a key challenge to academic thinking and research:
Much scholarly energy has been dedicated to locating works of art and literature within the moments in which they were created, but what if the temporality of the works in question was not simply confined to the horizon of their creation? What if, in keeping with Jarman’s vision of a temporarily more capacious art history, we pursued the possibility of a Middle Ages out of bounds? (47)
In Jarman’s film Caravaggio (1986), to take one small example, a scene in which the famous painter contemplates one of his works is punctuated sonically by the sound of a steam train in the distance and “through this jarring mix of visual, verbal, and aural signifiers, audiences are confronted with a collision of different time frames” (59). In Edward II, Jarman’s ideas for the set invoke the Cloisters Museum in New York, itself a kind of “ersatz historicism,” and the action of Marlowe’s reimagined play is interrupted by a gay activist protest. There is temporal layering here which calls into question any stable notion of a settled, specific, historical moment that can be referenced directly. Sometimes through collage, sometimes through palimpsest, Jarman’s strategic unsettling of historical “accuracy” brings the viewer into the films in often demanding and unexpected ways, designed to interrogate the encounter with the past rather than smooth it over.

Ruins and gardens are at the heart of Chapter 3, with illuminating discussions of the way these two ideas overlap and intersect, in wastelands and other fragmented landscapes. Old and Middle English poetry inform Jarman’s vision of the garden – Chaucer’s The Parliament of Fowls, for example, and the Old English poem The Ruin – which often speak to feelings of loss, but also of a kind of queer love of the outcast. Jarman takes this medievally inflected way of seeing and looks at the scrappy coastal landscape which surrounds his cottage in Dungeness. The sea kale, for example, seen by others as a weedy nuisance, is recuperated by Jarman in his own garden and in his films, in a conscious effort not to weed things out and to make us pay attention to things we too often overlook. In Chapter 4, Mills links Jarman’s work to the figure of the medieval wanderer. “On the one hand, wanderers arouse a sense of dread,” Mills writes:
Fear of difference and the unknown, or anxiety about unstable borders. On the other hand, they afford a glimpse of alternative worlds and customs, giving rise to feelings of wonder or fascination. Occasionally those who have been displaced, whether forcibly or voluntarily, may also awaken in beholders a sense of pity of demands for charity. (137)
In his poems and films, Jarman shows that he knew the myths of the wanderer well, from a range of sources including poems like Chaucer’s ‘Pardoner’s Tale’ and Coleridge’s Rime of the Ancient Mariner through to Carl Jung’s psychological archetype. The figure of the displaced wanderer and the questing knight find their way into his Super8 films from the 1970s. In Corfe Film (1975), a series of long takes and tableaux, the knight’s quest is deconstructed, “exposing its structures by highlighting the essential unattainability of the object of desire – which also includes our own desire, as viewers, to extract meaning from what we see” (153). A voiceover in The Garden states: “‘I offer you a journey without direction, uncertainty, and no sweet conclusion. When the light faded, I went in search of myself. There were many paths and destinations’” (153).
Mills’s “Afterword” to the book offers a personal reflection on his thinking about Jarman’s life and work. “How are my own medievalisms bound up with Derek Jarman’s,” he asks (176). It is the supposed “errors” in Jarman – his getting historical facts wrong; his persistent use of anachronism – that Mills notices and that lead him to think critically about the strategic uses of “errors.” Furthermore, Jarman helps him to understand that history is a “situated practice” to which we all come with our own subjective dimensions. Mills first came to Jarman queerly, that is, as a young queer man and a young queer medievalist. The “queer” and the “medievalist” are ultimately not separate for Mills; in fact, they may be one and the same. Certainly, as Jarman shows us, they have much in common. “‘The Middle Ages have formed the paradise of my imagination’” (1), Jarman once wrote. That imagination, so richly opened up by Mills’s outstanding book, is neither one thing nor the other, neither just “medieval” nor “modern,” rather the more challenging, uncertain, and perhaps generative “medieval modern” that is shared with us here.