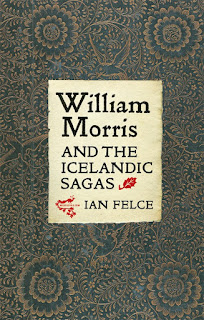 Ian Felce’s William Morris and the Icelandic Sagas concerns itself with Morris’ developing concept of heroism, for Morris meaning the ways which men in particular might and should lead a politically engaged life. The focus remains squarely upon Morris’ art, but that focus is thoroughly contextualized by the public goals Morris aimed to serve through creative production. Felce gives a nuanced and persuasive account of Morris’ personal development toward atheism and socialism through his reading and rewriting of medieval Icelandic literature.

Felce situates the book as a corrective to prior work on Morris, which he finds draws inaccurate conclusions because of those writers’ lack of familiarity with Old Norse. Felce challenges scholars who he believes, lacking the necessary training to compare Morris’ texts with their sources, offer erroneous explanations for Morris’ creative output. Felce takes especial issue with two kinds of criticism, that which he finds over-emphasizes Morris’ marital problems and that which unproductively questions Morris’ skill as a translator. In the first case Felce objects to suggestions that Morris’ attraction to Old Norse was primarily an escape from the stress of his wife, Jane’s, possible affair with Dante Rosetti. Felce convincingly demonstrates Morris’ interest in Old Norse from adolescence onward, before even meeting Jane, and his partnership with Eiríkur Magnússon, Morris’ Icelandic tutor, as forces unto themselves. Felce does not deny some impact on Morris due to his wife’s intimacy with Rosetti, but he emphasizes the sagas attracted Morris for their own virtues, providing an opportunity to grow artistically and philosophically, and not merely as a distraction from problems at home. As to the quality of Morris’ work, Felce suggests criticism that either apologizes for or attacks Morris’ skill as a translator fails to uncover the motivations behind Morris’ choice of style. Felce sees Morris moving toward increasingly hyper-literal translation in an effort to present medieval Iceland as a kindred culture to Victorian England. In so doing, Morris hoped to inspire communal values aligned with his own socialism. Felce believes Morris honestly miscalculated the linguistic skill of his readership, and thus the extent to which they might identify with saga age Icelanders. Thus, Felce undertakes close comparison of Morris’ translations alongside their Old Norse sources to reveal nuances of Morris’ inner life and public commitments lacking in other scholarship.

The book follows a chronological structure across which Felce traces Morris’ poetic and philosophical evolution. The introduction provides Morris’ general biography oriented around his meeting Eiríkur Magnússon and his subsequent period (1868-76) translating and adapting Old Norse works. Chapter 1 contrasts Morris’ earlier inspiration primarily from the Arthurian Grail quest with his turn toward the sagas as a creative wellspring. Felce outlines Morris’ initial attraction to the transcendentalism of the Grail legend, which by 1868 becomes increasingly frustrated as Morris moves toward atheism. “The Lovers of Gudrun” from The Earthly Paradise represents a turning point in which Morris adapts Laxdæla saga’s love triangle into a quest structure familiar from Arthuriana, but it rejects the transcendental in favor of the existential. The Kiartan of Morris’ “Lovers” finds ennoblement by recognizing the Edenic world of his early days as tragically devoid of meaning, but enduring nonetheless. Chapter 2 highlights Morris’ infidelity to his sources in ethical rather than linguistic terms, that is to say, in his treatment of honor and shame as conveyed by Old Norse níð: both “malice” and “perversion.” Felce acknowledges obscenity legislation necessarily affected Morris’ translation, but argues Morris was also personally uncomfortable with the brutality to which saga protagonists are often motivated in order to defend their sense of heteronormative masculinity. Seeing such sexual violence as petty cruelty, Morris’ versions of saga heroes rather serve more abstract moral concepts approved by Morris and his audience. One example comes from The Story of Kormak. In the Old Norse original, Kormáks saga, Kormak defeats an opponent, Bersi the Dueller, by wounding him in the buttocks with his sword. The saga understands Kormak thus symbolically implies Bersi is the willing recipient of a male-male sex act, slandering Bersi as a pervert. Bersi’s wife, Steingerd, consequently leaves him. Morris removes the sexual connotations and shame directed at Bersi in his translation. But he also retains Steingerd divorcing him, including the saga’s tone of moral approval over her choice, though it now seems odd and harsh to a modern audience. As such, Felce suggests that Morris’ characters sometimes suffer from a misalignment between their motivations and actions. However, Felce stresses Morris shows no self-awareness of this infidelity, but rather believed himself to be magnifying an underlying heroic ethos in the saga for his Victorian audience.

The first two chapters therefore provide a baseline for Morris’ idiosyncratic conception of his sources, against which the growth of his later work can be contextualized. Chapter 3 studies Morris’ exploration of heroic endurance through an ethics of incapacity. Morris’ treatment of Grettir the Strong dwells on the outlaw’s firm resolve despite decreasing physical ability and social debility. Grettir’s resilience sharpens the existential courage Morris attributes to Kiartan in “Lovers.” Chapter 4 addresses Morris’ progressively literal style in his translation of Heimskringla. Felce proposes Morris wanted to show his English audience how similar medieval Iceland and Victorian England were — or rather, could be. Morris thought the way of life depicted by the sagas manifested the socialist values he wanted to see reform England. He therefore hoped to reveal the two places as sibling cultures by stressing similar linguistic forms, appealing to ancient virtues to awaken a socialist conscience in his audience. But, Felce says, Morris misjudged how alienating his archaic style would be to his readers. Chapter 5 continues to develop the themes running through the first three chapters, seeing in Sigurd the Volsung Morris’ mature concept of the “deedful measure.” Felce takes Morris’ “deedfulness” as an approval of acting spontaneously by embracing life’s brevity. Against spontaneous Sigurd are gathered foes motivated by fear of death. Sigurd’s opponents foolishly try preserving a status quo that cannot last and thereby unwittingly hasten universal ruin. For Morris, the contrast means heroic action is only possible when dedicated to a common good that celebrates both human potential and frailty, without possibility of eternal salvation. Chapter 6 attends to Morris’ original fiction inspired by rather than directly translated from medieval literature. Morris turns from a historical Iceland to an imagined world based on Continental Germanic tribes, yet still exalting the heroic ideals developed through the translations. Felce suggests Morris’ embrace of a wholly fictional world helped inspire 20th century medievalist writers, such as C.S. Lewis and Tolkien.

Felce displays easy facility with Old Norse, critical for his comparisons with Morris’ translations. Felce also increases the accessibility of his own readings with footnotes offering his own translations of Norse passages. This apparatus extends to prose re-orderings of difficult skaldic verses, a quite useful inclusion. The only possible critique comes to mind regarding the book’s structure: the chronological structure of the book leaves Chapter 4 slightly out of place. The subject of Morris’ literal translation style seems more thematically akin to the contents of Chapters 1 and 2. As the fourth chapter, it breaks the arc between Grettir’s heroism through incapacity to Sigurd’s deedfulness as an embrace of frailty and transitory human life. This is, though, merely a consequence of the organizational program, which is otherwise sensible and serviceable.

Felce convincingly argues for a more nuanced perspective on Morris’ art, attendant to the complexity of his life. Felce thereby recovers an inner life for Morris motivating his public aims in ways unnoticed by prior scholarship. De-emphasizing the impact of Jane’s involvement with Rosetti recasts Morris’ work as all the more politically committed. Felce depicts Morris as a founder of modern English language Old Norse studies, providing a potential history of the field rooted more in social justice than national-colonial projects. Old Norse studies, and medievalists in general, can always benefit from such a project of recovery. By that same project, Felce points to ways scholars of nineteenth century art might draw connections between creative output and political engagement by Morris and his contemporaries. Studies of twentieth-century fantasy can also be enriched by more fully understanding the intellectual tradition behind writers such as Tolkien.