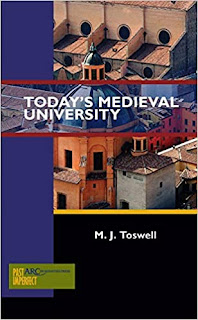 A contribution to the Past Imperfect series, a series intended to provide an overview of specific Medieval and European topics for readers new to the topics, the small, easy to handle and easy to read on the go volume illuminates the ways today’s European and especially North American universities retain and reproduce structures and legitimating procedures that are either Medieval or are felt to be Medieval. In the course of the volume, furthermore, M. J. Toswell means to advance the centrality of faculty to the successful university.

The first of three chapters that form the body of the book establishes the basic assumptions and method. Toswell presents Medieval practices and behaviors in order to distinguish these from others that do not seem to derive from the Middle Ages, even if they might derive from older traditions. The chief connection to the Medieval is through the experience and effect of certain procedures and manners, notably in final examinations and in commencement. Other social features of the contemporary university, such as the lecture and bureaucracy, are said to derive from other periods, such as classical for the lecture, and modern for the bureaucracy. The sense of having to build up to pass a final exam or set of exams, and that these be either general or specialized, depending upon the credential sought, is attached to the social capital of commencement in that once the masters pass the student and he or she takes the degree, the student is transformed into a master for life. Such essential transformation of the self is much more Medieval than it is classical, modern, or postmodern.

After describing two basic models of the university, chapter two details five prominent structural features that today’s university either inherited from the Middle Ages or conjured for itself with its own sensibilities about the premodern. The basic organizations include that of Bologna, in which students ban together and attract masters, and that of Paris, in which masters incorporate and take on students. While both models of governance inform today’s university, the Parisian model dominates. Complementing the basic model of a group of faculty organized into a corporate body that draws students, the contemporary university resembles a Medieval university in its development and maintenance of extensive endowments and provisions for scholarships and in its provision of room and board and other sorts of physical, emotional, psychological, social, and, often, spiritual care. The fourth and fifth features of the structure of the contemporary university detailed as Medieval involve the architecture – Gothic – and the generally insular, backward looking and slow-changing disposition of those in charge. The character of the university is said to come from its structural foundation in faculty authority and control.

The Medieval structure and character of today’s university serves the basic activity of the scholars: the maintenance and advancement of learning. Like Medieval universities, contemporary universities are said to be “extremely pragmatic institutions” (84), places in which scholars, be they faculty or students, did not and do “not aspire to think deep thoughts” (88). Rather, faculty prepare students for good jobs. In pre-modern times, these were in the church and the government. Today, they are in the government and in business. The vocational motive shapes the curriculum, so that we have, in Medieval and contemporary universities alike, taking notes in lectures, meditating on knowledge, mastering of writing and living styles, and the division of general studies and specialized studies, the former usually first, followed by the latter. In all, there is a keen connection between learning and teaching. These features complement more ancient curricula, notably that of close reading, oral disputation, and rhetorically effective writing. Corporal punishment is a Medieval feature absent from today’s curriculum.

The entertaining, breezy volume concludes with a brief consideration of major features of the university not treated. Notably, the university as an economic engine, the bureaucratic nature of academic leadership, and tenure’s connection to the monastery and its ways of living are mentioned. Each of these features is quite distinct in the two periods compared. It is the similarities between the Medieval and the contemporary that the volume means to highlight.

Showing how today’s university draws from a Medieval version of the university or from a post-Medieval desire to seem abidingly Gothic is the primary way the volume supports the motivating contention that governance is the foundational shaping influence of any specific university and that a legitimate university has a governance structure that has faculty at the center of it. In a nicely expressed statement, one that catches the best of the style and spirit of the essay, Toswell declares just so:

A university that does not have its faculty at the heart of its governance structure does not have a sufficiently strong structure. It will sway to the winds of change, alter its trajectory from decade to decade, swing to the beat of the current pundit or the current craze, leap to the economic opportunity of the latest fad or enrolment proposal, lose its way among all the competing ideologies, and falter at the hurdles of the modern, the postmodern, and now the posthuman society. (73)