Gribling: The Image of Edward The Black Prince 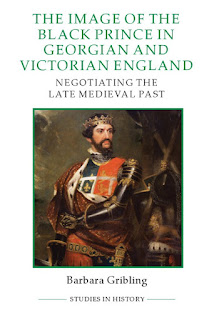 Barbara Gribling. The Image of Edward The Black Prince in Georgian and Victorian England: Negotiating the Late Medieval Past. Woodbridge: The Boydell Press, 2017.

Barbara Gribling’s The Image of Edward The Black Prince in Georgian and Victorian England: Negotiating the Late Medieval Past offers a wonderfully intricate survey of the ways that the image of the Black Prince evolved to support challenging and complex considerations of the role of the monarch, the martial history of the British people, and the portrayal of medieval chivalry.  A recent entry in the Royal Historical Society’s Studies in History series, this 171-page volume offers a closer examination of a wide array of art forms including paintings, opera, theatrical performances, toy theaters, panoramas, and even children’s books. Looking more closely at the Black Prince as a “generous and humble . . . military hero and loyal son” (12) celebrated for chivalry and an innate loyalty to England established him as a model for improved character in ways that successfully appealed to the socially elite, as well as the lower classes (18). Through her exploration of both royal and popular usage of the Black Prince’s image, Gribling draws readers in to a compelling interdisciplinary discussion of the ways that medievalism and the image of the Black Prince was used as an avenue to explore political power and personal character.

Gribling troubles the notion that the Victorians, especially, viewed the medieval period as an idyllic one. Indeed, the works that are examined in this book demonstrate that the usage of the Black Prince’s image shifted from sumptuous royal reimaginings of the medieval past carefully curated to celebrate English honor and power to lesser artwork targeted to more mainstream working-class audiences interested in interrogating the violence of war. Observing that the Georgians and Victorians alike used art for educational purposes, Gribling also notes that they used art to tease out the relationships between royal and parliamentary power and to question the ideas of nationhood and broader global ambitions. Ultimately, the chivalric figure of the Black Prince offered artists and their patrons a convenient starting point for a reconsideration of England’s past and present roles on a greater world stage.

A special highlight of the volume is Gribling’s first chapter, “Royal Associations: Heroic Character and Chivalric Ceremony at the Court of George III,” which hones in on the interest that George III had in the late Middle Ages and the ways that he could repurpose the medieval to emphasize his own majesty and power. Starting her survey with an overview of George’s Order of the Garter investiture ceremonies (he held his first in 1762 and his last in 1805), Gribling notes that for George the ceremonies were a powerful link between royalty, chivalry, and tradition; significant given George’s own status as a Hanoverian monarch.

However, the true highlight of this first chapter is a study of five out of a series of eight paintings that George III commissioned by the American-born artist Benjamin West for the audience chamber at Windsor during the 1780s. The five paintings that Gribling spotlights (The institution of the Order of the Garter, Edward III crossing the Somme, Edward, the Black Prince, receiving King John of France after the Battle of Poitiers, Edward III with the Black Prince after the Battle of Crècy, and The Burghers of Calais), all feature the Black Prince. Gribling argues that George III intended this sequence to highlight his usage of “the arts to assert the monarchy’s importance at a time when the powers of the king were being restricted” (27), as well as “a new kind of national history that moved away from the mythological to highlight a triumphal British past on a grand scale” (28). Drawing on archival materials that include West’s own preparatory notes for the sequence, the textual sources that he used for his designs, and contemporary studies of West and his reception, Gribling demonstrates the close collaboration between artist and patron. George III was very much involved throughout the entirety of the process, choosing the theme for the series, selecting West, and then regularly visiting with West to discuss art while the latter worked (27). Surviving records suggest that both men viewed art as educative, something that could help “improve a viewer’s character” (32).

Gribling notes that reading the Black Prince’s image in these paintings leads viewers to a consideration of the Black Prince as a model public servant and dutiful son, the perfect chivalric figure. Viewers could consider these paintings—and the Black Prince’s depiction—as lessons in royal authority and service to the monarch leading to a triumphant display of English character (30-31). The one weakness to this chapter is that Gribling—a scholar of national identity and consumer culture—does not explore the rich irony of a Hanoverian king partnering with an American-born painter to tell the story of British national identity in the years immediately following the (French-supported) American Revolution. The heightened tensions between Britain and France during this time period surely must have led George to think of past moments of national triumph worthy of celebration, something that future researchers may wish to explore more deeply.

A second highlight of The Image of Edward the Black Prince is Chapter 5, “Emulating Edward? Redefining Chivalry and Character.” In this chapter, Gribling suggests that the Black Prince’s image was widely used throughout the Victorian period (1837-1901) in a variety of materials targeted towards adolescents promoting proper masculine behavior (92). She identifies three primary shifts in this depiction: the Black Prince as a civilized, properly behaved gentleman; the Black Prince as “robust” and physically fit, capable of physical service to his nation (92-93); and finally as a violent warrior (93). Throughout this chapter, Gribling traces these shifts as they occurred in popular histories, children’s textbooks, games, and adventure novels. Of great interest is her observation that late Victorian authors and educators, especially post-1870, were interested in thinking about the Black Prince as a man of violence, “a lesson for boys on how not to behave” (109). Gribling establishes that Victorian writers and artisans recognized the medieval period, and even heroes such as the Black Prince, as highly complicated. Provocatively, she states that “[b]y the turn of the twentieth century, there was a growing ambivalence towards the Black Prince as a role model” (114), hinting that yet another sea-change in the construction of national identity was taking place.

Throughout The Image of the Black Prince, Gribling generally succeeds in tracing the connection between the Georgian and the Victorian period, something that she does best in the first part of the book, which focuses on royal usages of the Black Prince’s image. Her discussion of the ways that George IV, as both Prince Regent and monarch, developed and executed his own artistic agenda is more thinly developed than her treatment of the collaboration between George III and West, but will still be of likely interest to scholars focused on the Romantic period. (Here, Gribling turns her attention to other forms of art including carriage designs and even operas.) Another chapter’s focus on Victoria’s early reign considers the impact that Victoria and Albert as patrons had on the establishment of organizations such as the Royal Fine Arts Commission. And clubs devoted to the pursuit of history. In pointing to the keen interest that Albert had in medieval history, as well as his commitment to images of the Black Prince being 1) closely connected to royal authority and 2) used as an indicator to the recipients of royal honors that a requirement for said honor was continued and committed service to the crown (59-61), Gribling examines the extensive correspondence surrounding the 1848 fresco Edward III conferring the Order of the Garter on the Black Prince. Despite the intense collaboration between Albert, the artist, and various ministers, a shift in attitudes had taken place by the 1860s, with the Black Prince’s reputation in decline due to concerns regarding “the dark side of chivalry” (68). At the end, while it is refreshing to learn more about Albert’s keen interest in the arts and in history, a more extensive treatment of Victoria’s own views would have also been appreciated here.

In the second movement of the book, Gribling shifts gears to consider more popular usages of the Black Prince’s image, especially during the late Victorian period. The chapter “Politics, Parliament and the People’s Prince” examines depictions of the Black Prince in popular histories and considers how Victorian historians were interested in recontextualizing the events of the Good Parliament. In critiquing “Chivalry and Character” in Chapter 5, Gribling utilizes a wide array of sources, including paintings, histories, games, and educational materials, while Chapter 6 (“Warrior for Nation and Empire”) focuses on plays, handbills, and needlework. Although Gribling succeeds in pointing out that the Black Prince’s image, and that of chivalry in general, evolved over the course of the Victorian period, especially among non-royal audiences, a further close reading of some of the wonderful archival materials would be welcomed—some feel only lightly attended to, which is a shame given the true variety Gribling has gathered in this slim volume.

Overall, this volume proves to be a welcome resource for scholars of literature and history, especially those interested in the long eighteenth and the long nineteenth centuries. By concentrating on representations of the Black Prince in drama, art, and material culture. Gribling’s work develops a further understanding of what medievalism and national identity meant to royal and popular audiences alike in the long nineteenth century (and beyond).  In the end, The Image of the Black Prince draws new attention to the complicated views the Georgians and the Victorians had of the medieval period and the ways it could be used to depict and critique power, chivalry, and conduct.