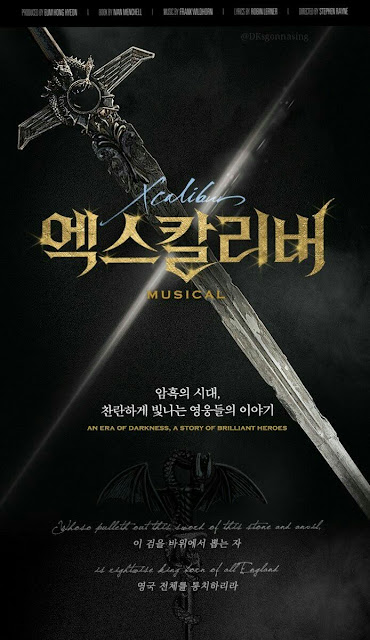 Streaming on Broadway on Demand (Summer 2020)

Stage musicals are big business in Korea, where they feature casts and orchestras so large that they would bankrupt Broadway and West End productions, and play to audiences numbering in the thousands. Xcalibur, The Musical—directed by Stephen Rayne with music by Frank Wildhorn, book by Ivan Menchell, and lyrics by Robin Lerner—is such a stage musical.

Xcalibur had its beginnings in 2014 in Switzerland, where the original production premiered at the Theater St. Gallen. In a formula that has proven successful for any number of producers and composers including Wildhorn, who is a well know figure in musical theatre in Japan and Korea (as well as on Broadway—The Scarlet Pimpernel and Jekyll & Hyde), the show was originally written in English and then translated into German.  The Swiss production then toured Germany for two years of fine tuning, after which it was translated back into English and then into Korean for the 2019 Seoul premiere, which attracted more than enthusiastic sold-out audiences once it was announced that the three principal roles of Arthur, Lancelot, and Guinevere would be rotated among leading K-pop performers.  The Korean production was subsequently recorded for audio and video distribution, and is currently streaming on Broadway on Demand in Korean (and Latin!—for the incantations of Merlin and Morgan) with English subtitles, either for free or for a nominal fee.

Medievalism in the form of the stage musical is rare.  Spamalot stands in a category all by itself because it is, well, Spamalot.  Pippin, despite its lack of any historicity, has its moments. Marco Polo, in several less than memorable musicals, gets to fall unwittingly in love with the daughter of Genghis Khan, both of whom are invariably played by non-Asian actors.  Nothing is added to the legends of Robin Hood by Twang! or of Joan of Arc by Goodtime Charley. Camelot has not aged well, and has always been problematic, despite any Kennedy-era nostalgia, because of its genre (it is a musical tragedy), and even worse its gender politics (“How to Handle a Woman” indeed!). Xcalibur is harmless enough—and its plot is markedly different than that of the original Swiss production, which was entitled Artus-Excalibur, and which told a much more complicated version of the Arthuriad. What may be most interesting about Xcalibur is that it is simply a rare example of a Korean take on the legend of King Arthur and the Knights of the Round Table. 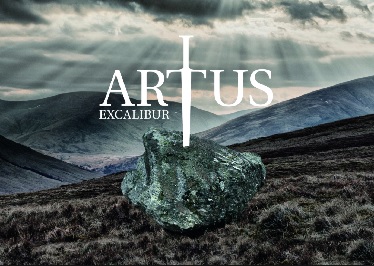 To retell the story of Arthur is to retell an oft-told tale that offers little in the way of suspense and that generally admits little in the way of variation.  There is, as Norris J. Lacy once remarked in an essay on Arthurian film, a “tyranny of tradition” underlying the Arthuriad. (See “Arthurian Film and the Tyranny of Tradition,” Arthurian Interpretations 4.1 [Fall 1989]: 75-85.) Xcalibur avoids one trap that many versions of the Arthuriad fall into: it does not seek to tell the whole story of Arthur and his knights, though it does include a significant number of well-known highpoints.  It offers the (back)story of the sword in the stone, the founding of the Round Table, the conflict between Arthur and his half-sister Morgan, the betrayal of Lancelot and Guinevere, and an Arthur victorious who saves his country from an invading horde of pagan Saxons—which is, admittedly, more than enough to fill 150 minutes of stage time.

Xcalibur opens in fifth century Britain on a farm in the west managed by the kindly Ector who has adopted Arthur from Merlin, along with any number of other boys (the band of brothers who will become the Knights of the Round Table), including Lancelot whom the kindly Ector has rescued from a broken home and an abusive father. The country is riven within by political divisions though united in its adoption of the Christian faith and threatened from without by pagan Saxons who have just landed a force of some 2000 marauders on the country’s eastern shore under the leadership of the cruel Wolf who set about doing what we expect pagan marauders to do.  Attacking and sacking a monastery, the Saxons murder the nuns and monks, and take captive Morgan, the daughter of Uther Pendragon who has been imprisoned there since the death of her father. Morgan yearns for her freedom, the throne, and Merlin—not necessarily in that order—and Xcalibur advances a complicated love-hate relationship between Morgan and Merlin.  Uther had succumbed to the fire of the dragon—its destructive force—instead of the breath of the dragon—its creative force.  Morgan will reject the latter; the plot of Xcalibur turns on whether Arthur will eventually embrace the fire or the breath of the dragon.

As Morgan leads Wolf and his Saxons to Uther’s castle in the Midlands, Merlin journeys westward to inform a more than shocked Arthur (on his eighteenth birthday no less) of his true identity and destiny, which is confirmed when he is able to pull the sword from the stone.  In short order, everyone rallies behind Arthur, plans are made to build Camelot on the site of an ancient Druidic temple, and Arthur meets Guinevere, in a scene reminiscent of their meeting in Camelot where she doesn’t know who he is at first—though here Guinevere is not some pouty, pampered coquette lamenting that she will never experience the “simple joys of maidenhood.”  In Xcalibur, Guinevere is trained in the martial arts, and will actually best Lancelot in a bōjitsu match when they first meet.

All continues to go well—too well—as the Round Table takes shape, and Arthur and Guinevere marry—as the entire cast sings of “one king, one voice, one land, one heart, one oath, one quest, one vision shared.” But both the Saxons and Morgan have been up to no good, as we would expect them to be. Fanning the Saxon ire, Arthur has killed the Wolf’s son when a Saxon raiding party attempted to attack Camelot, and Morgan is unhappy that she has been rejected by Merlin and passed over for the throne.  The Saxons succeed in poisoning Ector, and Lancelot and Guinevere betray Arthur—both of which events lead Arthur to embrace the dragon’s fire.  The murder of Ector and the betrayal by his best friend and his wife unhinge Arthur who banishes almost everyone from Camelot, and who then resorts to plans to defeat the Saxons that will result in nothing short of disaster, with Britain being overrun by pagan hordes.

As is often the case in versions of the Arthuriad, it is up to Merlin to come to Arthur’s assistance in his hour of need.  Xcalibur had already established a symbiotic relationship between Merlin and Morgan, and Merlin will feed off that relationship to bring Arthur to his senses.  Just as Arthur was conceived when Merlin allowed Uther to shape shift into Ygraine’s husband, so Merlin shape shifts into Arthur and asks Morgan to kill him.  When Morgan does so, both she and Merlin die, and the real Arthur comes to his senses and leads his troops to victory against the Saxons. Lancelot too returns to die fighting at Arthur’s side, and as nuns and monks appear on the battlefield to tend to the wounded and pray for the dying, they are joined by a white wimpled novice, Guinevere, whom Arthur forgives, and who joins the convent freely to atone for her sins.  Xcalibur then ends with a double musical reprise as Arthur sings “What Does It Mean to Be a King” and “Remember This Night,” the latter perhaps an intentional echo of “the one brief shining moment that was Camelot.”

A twelfth-century commentator, long thought to be Alanus de Insulis, is said to have asked these rhetorical questions: “Whither has not flying fame spread and familiarized the name of Arthur the Briton, even as far as the empire of Christendom extends?  Who, I say, does not speak of Arthur the Briton, since he is also better known to the peoples of Asia than to the Britanni, as our palmers returning from the East inform us?”  (Quoted in Roger Sherman Loomis, ed., Arthurian Literature in the Middle Ages, A Collaborative History [1959; rpt. Oxford: The Clarendon Press, 1979], p. 62.)  Xcalibur would certainly suggest that Arthur the Briton is “known to the people of Asia.” Indeed, there is a flourishing Japanese branch of the International Arthurian Society that has produced a steady stream of important scholarship, and Japanese anime has given us a number of new versions of the Arthuriad. But as I indicated earlier, the Korean embrace of the Arthuriad has been less evident.

Given its connection to the world of K-pop, the Broadway on Demand production of Xcalibur is certainly a stage musical for and about young people. The performances are energetic, and all the members of the cast can really sing.  The lyrics are catchy—the two reprised songs, “What Does It Mean to Be a King” and “Remember This Night,” are touching and memorable. The sets are impressive.  The choreography is expert.  A great deal of work obviously went into the production, and the audience reaction is overwhelming positive.  Certainly the production’s message—“one king, one voice, one land, one heart, one oath, one quest, one vision shared”—would have resonance in Britain in 2019, arguably no matter which side of the Brexit argument one wanted to advance.  The Breton hope has long been that Arthur will return in England’s hour of need.  But might not the message of Xcalibur also have a resonance on a peninsula that is home to a once united, now too long divided Korea in a year when an American President alas raised false hopes that “one shared vision” was possible for the two Koreas?