Hardwick and Lister: Vikings and the Vikings 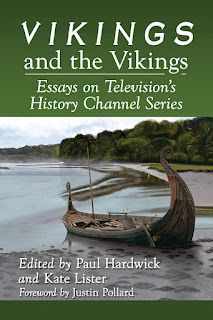 The History Channel’s Vikings TV series is a remarkable phenomenon. Although it has never had quite the budget, viewing figures or fame enjoyed by Game of Thrones, it has been a notable critical and commercial success worldwide, not only encouraging distinctly similar sprawling medieval epics (the BBC’s The Last Kingdom) but even spawning a successful parody (Norsemen, created by the Norwegian television company NRK). Nevertheless, Vikings stands as merely the latest in a long and extremely colourful tradition of cinematic and televisual evocations of the vikings (a tradition recently explored in Kevin Harty’s splendid edited volume The Vikings on Film). Where it differs from all its predecessors, though, is in the sheer scale of its engagement with its subject: when its sixth and final season concludes later this year, we shall have seen 89 episodes – nearly 70 hours – of the adventures of Ragnar Lothbrok, his heirs and associates. There has never been such a whole-hearted commitment to re-creating the world of early medieval Scandinavia on screen, lending a depth and scope to its vision that, whether or not we agree with all the decisions taken by the show’s creator, David Hirst, can only be commended. Some of the ideas, sources and inspirations that went into the making of the immersive world of Vikings have previously been discussed in brief by the programme’s historical adviser, Justin Pollard, in a glossy popular publication produced by the History Channel, but such a large-scale imaginative engagement with the past merits full, serious and critical scholarly attention.

In this book, edited by Paul Hardwick and Kate Lister, Vikings receives the friendly but rigorous hearing it deserves. After a foreword by Pollard, and the editors’ introduction, this collection comprises eleven chapters, bringing together historians, archaeologists, and specialists in cultural studies and medieval reception: a formidable array of scholarship is brought to bear, although the collection might have been strengthened still further with a contribution by a saga specialist. Nevertheless, with such a disciplinary spread the book incorporates a very satisfying diversity of perspectives and ranges widely across the ample material provided for consideration by the series.

The first three chapters explore various aspects of the source materials for the story of the (semi-) historical Ragnar Loðbrók, their transmission and their re-imagining in the hands of the series creators. Before Vikings, it is reasonable to say that Ragnar was not an especially prominent figure in the non-specialist imagination, but this has not always been the case: the opening chapter, by Stephen Basdeo, explores the birth of modern enthusiasm for the romantic Northern past in Georgian Britain, demonstrating the currency of English translations of the thirteenth-century Latin poem The Death-Song of Ragnar Lodbrok in the founding works of this tradition. As a figure in both British and broader northern European history, Ragnar served a useful purpose for scholars attempting to propound an English identity with a significant Scandinavian component, and he enjoyed – if only temporarily – a wider familiarity with the reading public.

The next chapter, by Donna Heddle, goes back to the medieval sources, not just for Ragnar but for the vikings more widely, illustrating the free and, Heddle believes, successful play made with them by the creators of the series in a tripartite conversation between the evidence of saga and other medieval sources, strongly-entrenched pre-existing popular conceptions of vikings, and the messages that the series writers were attempting to convey. This analysis of the relationship between historical ‘truth’ and the dramatic vision conjured by Vikings continues in a fascinating chapter, ‘Fantasizing history’, by Eleanor Chadwick, which unpacks ideas of ‘authenticity’ and ‘anachronism’. Chadwick takes the reader through an examination of the tensions in producing an exciting drama that must to some extent deliver on gory audience expectations fostered by two centuries of romanticised stirring viking narratives, while still respecting the sources on which – correctly or incorrectly – its claims to realism are supposed to depend. These problems come into particular focus as the show engages in the difficult trick of providing the violent, rapacious, barbaric vikings of popular legend at the same time as allowing for more ‘enlightened’ heroic figures such as Ragnar, with whom a modern audience can identify. Considering such themes in the series as its depiction of the blood-eagle ritual (the historical truth of which has been debated at length), Chadwick shows how its makers have emphasized the telling of meaningful stories over accuracy to an alleged but specious ‘original’, and in so doing have echoed what the saga-writers themselves did, an authenticity of form rather than of content.

The central section of the book is dedicated to four chapters that consider different aspects of the depiction of gender in the series. Katherine Lewis examines masculinity, once again placing the series in dialogue with the sagas and comparing how male identities are constructed and performed in each. Acts of raiding and fighting are crucial in both cases, although Lewis notes how the series repeatedly shows that the performative nature of maleness among the vikings both engenders anxiety in the old or incapacitated and also offers opportunities for its female characters – and especially Ragnar’s first wife Lagertha – to occupy stereotypically male positions. In so doing, this subverts traditional popular images of the vikings as, in Lewis’s words, the ‘poster boys of toxic masculinity’. In the next chapter, Shane McLeod tackles the show’s ‘shield-maidens’ directly, noting their popularity: Lagertha, in particular, is one of the show’s most celebrated characters and an online favourite, the heroine of any number of memes and GIFs. McLeod’s question is what evidence, if any, there might be for warrior women in the historical and archaeological record. This became, of course, a question of considerable contention and debate in 2017, when a group of scholars re-interpreted one of the burials accompanied by weapons at the Viking age site of Birka in Sweden as that of a high-status female warrior. The identification remains contested, and Lagertha fans will perhaps be disappointed that McLeod, whilst allowing that female viking warriors remain ‘a tantalising possibility’, is clearly swayed by the large-scale absence of any mention in the written record of their appearance on battlefields.

For all that fighting and battle are central to the action in Vikings, one of the strengths of creative engagement with the early medieval world on this scale is the attention that has been paid to questions that, while manifestly important in themselves, have received scarcely any notice in most other televisual and cinematic encounters with the vikings. In her chapter, Lillian Céspedes González brings a welcome turning-aside from violence to explore the portrayal of motherhood in Vikings. Mothering in Viking-age Scandinavia is neither especially well evidenced nor well understood, but, as Céspedes González shows, it is nevertheless a recurring and significant theme in the show, as the writers and producers take advantage of their imagined medieval to think through ideas that are relevant to contemporary society, not least the challenges facing the harassed and over-stretched working mother.

The next chapter, written jointly by the editors, Kate Lister and Paul Hardwick, tackles sexual violence, a subject which – perhaps unsurprisingly – also appears in a number of the other contributions. Rape has regularly been portrayed among the staple behaviours of hypermasculine vikings in pop culture, although the poverty and character of the medieval records render sexual violence in the Viking age almost entirely opaque and outside our knowledge. It is notable that, of all the book’s chapters, this is the one that most brings forward Vikings not just as a response to the early medieval past, but also as an intertextual dialogue with all the other representations of the vikings as an artefact of popular culture in print, on screen and online. The handling of sexual violence in the series is certainly one of the most pointed and divisive test-cases of the Vikings production team’s delicate efforts at balancing pre-existing expectations of viking behaviour with contemporary sensibilities; in this case the rejection of rape culture. While Lister and Hardwick find plenty to praise in the show’s nuanced approach to gender, they note that it remains firmly enmeshed ‘in a popular cultural milieu in which sexualized violence and coercive sex are a given norm’.

Crucial to creating the convincing character of Vikings are the sets, landscapes and material culture that immerse the viewer in a world that seems lived-in and has depth. It is thus entirely appropriate to see three contributions devoted to the characters’ interactions with their physical environment. Howard Williams and Alison Klevnäs explore relationships between the living and the dead: Vikings, they note, is strangely lacking in the funerary monuments that were and are a characteristic feature of the landscape of Scandinavia. Instead the dead become a presence through the handling and display of bones, be it the animal and human charnel displayed in and around dwellings or the skull of Jarl Borg’s long-dead first wife, carried and consulted by the Jarl in a number of episodes, including, crucially, just before his blood-eagling at the hands of Ragnar. The chapter on ‘Nature and supernature’, by Aleks Pluskowski, continues the investigation of the richly associative imaginative world in which the action of Vikings is situated but turns the focus towards human relations with animals, the natural environment and the wilderness. This reveals the show’s rather simplistic dichotomy of the civilized/Christian on the one hand and the barbarian/pagan on the other playing out through an environmental metaphor. The viking characters in the series, Pluskowski suggests, are positioned (following a familiar cinematic trope) as more instinctively in tune with the natural world by virtue of their barbarousness; Anglo-Saxons, Franks and other ‘civilised’ characters are, by contrast, distanced physically, emotionally and spiritually from the nonhuman environment. The last of the archaeologically-focused chapters sees Alex Sanmark and Howard Williams (in his second contribution to the collection) discussing the treatment of judicial practice in Vikings, concentrating in particular on the ceremonial spaces in which such business is transacted, the thing-sites. Although the Viking-age thing (ON: þing) has long been celebrated as a supposed proto-democratic assembly, their sites and operations have only rarely been represented in previous dramatisations of the early medieval Scandinavian world. In Vikings they are thoughtfully handled, building upon what is known historically and archaeologically but also applying intelligent conjecture to create a convincing visual spectacle. Sanmark and Williams particularly applaud the fact that in repeated presentations of assemblies across the course of its successive seasons, the show depicts them not as static and given but as changing and adaptive performances that reflect the growth of centralised power and aspiration. As the profits from raiding roll in it is evident that for Ragnar and his successors, þings can only get better.

The book concludes on a sombre, but extremely important note, with Richard Ford Burley’s contribution on the appropriation of ‘viking’ identities by white nationalists (specifically in North America, although it is obviously a broader problem). Ford Burley asks what the series can do to avoid complicity, making a number of suggestions for active rejection of co-option by right-wing extremists.

All-in-all, this is a rounded, well-conceived and very welcome volume that will not only enhance enjoyment and understanding of Vikings itself, but in its wide-ranging exploration of issues of portrayal and reception of violent and problematic pasts also holds a great deal of invaluable insight for studies of medievalism more generally. Given the attention lavished on the look of the series, it is perhaps a shame that there are no photographs or stills included in Vikings and the Vikings; presumably there were licensing complications. However, this is a relatively minor issue that does little to detract from this significant and thoroughly enjoyable addition to study of the televisual consumption of the Middle Ages.

Posted by Mikeinexile at 4:52 PM