We Want Wall. We Want Knight. Not 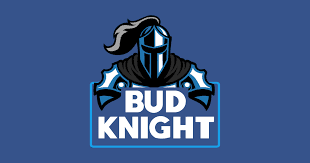 We Want Wall. We Want Knight. Not. Medievalism and the Atlanta Super Bowl

In December, 2018, U.S. Homeland Security Secretary Kirstjen Nielsen made a baffling statement during an appearance before the House Judiciary Committee. When pressed on her views on how to best protect the country’s borders, she stated: “From Congress I would ask for wall. We need wall.” While some observers read her statement as a moment of comic relief in the midst of a looming government shutdown and the resignation of the defense secretary, Nielsen’s perhaps stress-induced double elision of the definite article revealed how the “wall” had become a self-standing but extremely vague signifier for the larger political struggle about immigration.


During the ensuing discussion, various Democratic politicians denounced the wall as an ineffective “medieval” solution. President Trump countered that a medieval wall “worked then, and it works even better now.” As Paul Sturtevant commented in the Washington Post, this exchange about the medieval ‘nature’ of the wall showed how both political positions misread medieval culture from a an uninformed presentist perspective: “Critics of the wall used the term derisively. When they say something is ‘medieval,’ they are evoking the outdated image of the ‘dark ages,’ where everyone was muddy, bloody, backward and superstitious. … President Trump linked the wall to the Middle Ages, knowing that “for a significant portion of the American public, especially among his base, being ‘medieval’ is not a bad thing. Instead, it’s aspirational.” His invocation of “medieval” seems to speak directly to a white nationalist audience whose members have been coopting racist and masculinist readings of the medieval world for many years. Remember the violent demonstrations at Charlottesville, VA, in 2017? 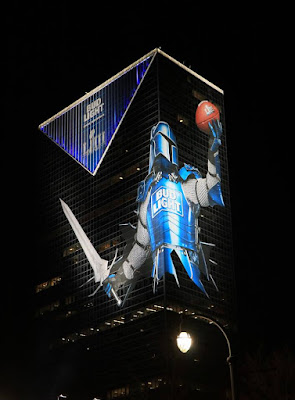 I was struck by a similar intentional elision of historical specificity and dog whistle referentiality when, some days ago, the widely known ‘Bud Knight’ began to be projected onto the still only half-finished 101 Marietta Street Building in Atlanta as part of the city’s public celebrations for the Super Bowl LIII. [Thanks to medievalist © Daniel Kline for the photo] This year’s ‘Bud Knight’ is an extension of Anheuser-Busch InBev corporation’s “Dilly Dilly” trilogy of medieval-themed Super Bowl ads which, according to research done at Humboldt University, Germany, and Stanford University, continue to sustain companies’ branding and sales efforts long after the actual sports event for which they are produced. Thus, the 2018 medievalist ad investment may well have increased Budweiser sales by as much as 3.9 percent and revenues by as much as 4.7 percent as the Super Bowl ads continued to run during the post-event weeks. It is clear that these impressive 2018 numbers convinced Anheuser-Bush InBev that the campaign might work even across multiple years.


Megan Arnot has recently provided a revealing assessment of the ‘Bud Knight’ and several other medieval-themed ads by Capital One, Gillette, the U.S. Marines, INTEL, Miller Lite, and Pepsi for The Public Medievalist: She concludes: “Advertising sells you an image of yourself, improved by their product.” Therefore, in order to make the typical Super Bowl audience purchase more Bud Light, offering them an image of martial and virile manhood is a tried and proven option. Of course, the advertisers don’t want to exclude women entirely: “But the focus is still on masculinity, particularly a martial or virile masculinity. In [the case of the ‘Bud Knight’ ads], masculinity does not have to mean a life that women can’t participate in. But men are always the majority of the central figures: the heroes, the kings, the knights. Though women may be present, the focus is on male figures—when they are not objects, women should be participating as one of the boys.”


If advocates of the “We Want Wall” campaign use it to rally President Trump’s electoral base with the help of a medievalist reference, Anheuser-Busch’s revival of the ‘We Want [Bud] Knight’ for Super Bowl LIII seems to follow a similar strategy, one geared towards an audience with a similar image of a martial and virile Middle Ages. I wonder, however, if the company and its ad agency realize that the vague reference to the imagined continuities between medieval knights and 21st century football players and their fans may dredge up some unintended associations. After all, this year’s Super Bowl doesn’t take place in Minneapolis, MN but in Atlanta, GA, and for the U.S. South the history of knighthood is invariably linked with the history of slavery. Southern political leaders and plantation owners in the nineteenth and early twentieth century anchored their practices with numerous specific references to the Middle Ages, and the Southern belle and the Southern gentleman constructed their identities based on those of the medieval (English or Scottish) courtly Lord and Lady. If you don’t believe me, here is what Mark Twain had to say about the influence of Walter Scott’s historical novels (for example Ivanhoe) as a ‘cause’ for the U.S. Civil War in his Life on the Mississippi:

Then comes Sir Walter Scott with his enchantments, and by his single might checks this wave of progress, and even turns it back; sets the world in love with dreams and phantoms; with decayed and swinish forms of religion; with decayed and degraded systems of government; with the sillinesses and emptinesses, sham grandeurs, sham gauds, and sham chivalries of a brainless and worthless long-vanished society. He did measureless harm; more real and lasting harm, perhaps, than any other individual that ever wrote. Most of the world has now outlived good part of these harms, though by no means all of them; but in our South they flourish pretty forcefully still. Not so forcefully as half a generation ago, perhaps, but still forcefully. There, the genuine and wholesome civilization of the nineteenth century is curiously confused and commingled with the Walter Scott Middle-Age sham civilization; and so you have practical, common-sense, progressive ideas, and progressive works; mixed up with the duel, the inflated speech, and the jejune romanticism of an absurd past that is dead, and out of charity ought to be buried. But for the Sir Walter disease, the character of the Southerner–or Southron, according to Sir Walter’s starchier way of phrasing it– would be wholly modern, in place of modern and medieval mixed, and the South would be fully a generation further advanced than it is. It was Sir Walter that made every gentleman in the South a Major or a Colonel, or a General or a Judge, before the war; and it was he, also, that made these gentlemen value these bogus decorations. For it was he that created rank and caste down there, and also reverence for rank and caste, and pride and pleasure in them. Enough is laid on slavery, without fathering upon it these creations and contributions of Sir Walter.


Walk the streets of Atlanta, and you can trace the remnants of the mentality Twain (admittedly exaggeratedly) laments: Visit Margaret Mitchell House, and you may understand how Mitchell’s famed 1936 novel, Gone With the Wind, and its 1939 movie version yearn back to “…a land of Cavaliers and Cotton Fields called the Old South. Here in this pretty world, Gallantry took its last bow. Here was the last ever to be seen of Knights and their Ladies Fair, of Master and of Slave. Look for it only in books, for it is no more than a dream remembered, a Civilization gone with the wind….” Or stop by Rhodes Hall on Peachtree Street, a now musealized former private residence modeled after a medieval castle in 1905. It romanticizes the Lost Cause, its generals, politicians, and slavery in a series of magnificently produced painted glass windows. Rhodes Hall’s massive Romanesque Revival stone walls were (aptly) constructed with boulders extracted from Stone Mountain, a commanding geographical presence, 1,686 feet tall and 3.8 miles in base circumference, only 16 miles outside of the center of Atlanta. In 1915, stirred by the nostalgic depiction of the nineteenth-century history of the (first) Ku Klux Klan in D. W. Griffith’s 1915 silent film, Birth of a Nation, activist William Simmons, together with over a dozen other men, revived the Klan on Thanksgiving Day, 1915, by igniting a flaming cross on top of the mountain. Stone Mountain also features the well-known gigantic three-acre relief sculpture, 400 feet above the ground, and inaugurated as recently as 1970, of Confederate icons Robert E. Lee, Thomas “Stonewall” Jackson, and Jefferson Davis, together with these cavaliers’ favorite horses, “Blackjack,” “Traveller,” and “Little Sorrel.” While owned by the State of Georgia, Stone Mountain has been transformed into a theme park with various seasonal events that attract c. four million annual visitors, more than any other place in the state. Except for its street address, 1000 Robert E. Lee Blvd, and the stone relief, the company has almost completely cleansed the site of its unpleasant racist history. However, this hasn’t kept ever new groups of neo-Nazis, Klan members, Sons of Confederate Veterans, Neo-Confederate Leaguers, and members of the heavily armed Georgia Security Force III% from reviving, most visibly during the 2016 Rock Stone Mountain event, the Confederate history of Stone Mountain and invite “every able bodied soul of our race” to defend “these lands of green glens, rolling hills, and deep glades” from “being purposely flooded with hordes of raping scoundrels.” The 2016 event was thwarted by the NAACP, Black Lives Matter, All Out ATL, and other counter protest groups, who easily outnumbered the right-wing groups and reclaimed Stone Mountain’s symbolic presence.


Tonight, on the evening of the Super Bowl, the 3,600 acre amusement park section of Stone Mountain is closed because, as Atlanta’s WSB-TV 2 reports, the owners of the park felt they could not provide sufficient security at the site. Park officials had known since November that white supremacists were planning a rally close to the widely televised Super Bowl. “Officials had been considering closing the park for at least a week after the group vowed to hold the rally despite being denied a permit. On Thursday, that group announced they had canceled their rally amid infighting and fears for personal safety.” According to the Atlanta-Journal Constitution, a small group of left-wing activists showed up on Saturday, despite the park closure. As they marched, they shouted “Good night, alt right” and “Death to the Klan,” burned a Klansman in effigy, and sported signs with slogans like “Sandblast Stone Mountain,” “Death to the KKK” and “Dixie be damned.” As a medievalist, who sees the connections among the above medievalisms, my own sign would probably have red, “We Don’t Want Knight.”


This is the context within which the famed ‘Bud Knight’ is making its reappearance in the 2019 Atlanta Skyline and at Super Bowl LIII. Unlike the harmless pun that brought us the Knights Inn hotel chain, the ‘Bud Knight’ needs to be recognized for what he is, even if he masquerades as just another fun superhero to please ‘the boys’.

Postscript: I wrote this entry and published it intentionally right before the Super Bowl game began. And then I witnessed one of the smartest and surprising commercial mashups between the Budweiser and Game of Thrones brands: Sir Gregor Clegane of GoT fame entered the world of the Bud Knight and simply killed him off.  In GoT, Sir Gregor is known as "The Mountain," a giant of a man who serves the evil queen Cersei. The mashup may have delivered us from "Knight", but now we have "Mountain" instead. And here in Atlanta, in light of the history and symbolic heritage of Stone Mountain, the mashup feels more like a step back towards 1915 than progress toward a world with less violence and racism.