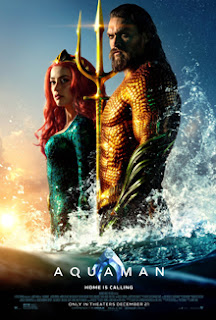 Reviewed by Kevin J. Harty, La Salle University
harty@lasalle.edu
Cinema arthuriana is not a film genre.  Rather, it is a form of film medievalism that lately can be found in more and more cinematic genres.  Cinema arthuriana had its beginnings at least as early as 1904 when Thomas Edison, with mixed success, brought a version of Wagner’s Parsifal to the screen for New York audiences, thereby not only establishing cinema arthuriana as a new form of medievalism, but also reworking an already established form of medievalism, opera arthuriana, into a new genre.
Twain has remained the most frequent source for cinema arthuriana on both the large and on the small screen, with nods (often more alleged than real) to Malory informing any number of other Arthurian films.  And Arthurian films (and television programs) have at times proven to be fades, and the current decade seems no exception.  The 1950s, for instance, gave us The Adventures of Sir Galahad (a serial), The Adventures of Sir Lancelot (a television series penned by blacklisted Hollywood writers), The Black Knight, at least three television versions of Twain’s Connecticut Yankee, Knights of the Round Table, Knutzy Knights (a Three Stooges’ vehicle), a Spanish Parisfal, and Prince Valiant.
More recently, Arthur, or Arthurian motifs, can be found in some unexpected films: in the Kingsman franchise, in Ready Player One, in Mad Max: Fury Road, in Transformers: The Last Knight, even in the latest (and supposedly last) installment of the Syfy Channel’s Sharknado franchise.  And now in James Wan’s 2018 Aquaman.
Like Arthur, Aquaman has had a complicated legacy.  The DC Comics’ hero first appeared in 1941 in a supporting role, but his character subsequently came into its own when Aquaman became a founding member of the American Justice League.  As his character developed, his appearance also changed from wimpy kid to wonder boy to buff, often overly so, super hero—sometimes blonde, sometimes not; sometimes bearded, sometimes not.  Originally, his foes were Nazi submarine commanders and other Axis villains.  Eventually, his identity was fleshed (fished?) out: he was Arthur Curry, son of a lighthouse keeper and of an outcast queen of the underwater world of Atlantis.  By either his mother or his father, he had a troubled, or trouble-some, half-brother, with whom he would eventually come into conflict. His super powers included an ability to communicate with marine life and to live both on land and under water.  Aquaman’s character has appeared not only in print, but also on television and on film, and as the butt of a long-running joke on HBO’s series Entourage, in which Adrian Grenier’s Vince Chase was cast in a fictional version of Aquaman directed by Titanic’s James Cameron, but not in its sequel. (For more on Aquaman’s development as a superhero across multiple genres, see Alastair Dougall’s The DC Comics Encyclopedia.)
In James Wan’s Aquaman, Jason Momoa plays the title.  Momoa began his entertainment career in 1998 as a swimwear model.  At 19, he was chosen for the part of Jason Ioana, one of the lifeguards in the television action series Baywatch Hawaii.  After repeated trips to the gym and to the tattoo parlor, Momoa’s career blossomed, and he was cast in (literally) meatier roles including that of the title character in a remake of Conan the Barbarian and, perhaps more famously, that of Khal Drogo in HBO’s Game of Thrones.
Aquaman opens in Maine in 1985 as lighthouse keeper Thomas Curry (Temuera Morrison) rescues a woman who has washed ashore.  She is Atlanna (Nicole Kidman, who adds much needed gravitas to the film), the princess of Atlantis, fleeing a forced marriage.  Thomas and Atlanna fall in love, and have a son, Arthur.  Atlanna is kidnapped and returned to Atlantis where she is executed for having a half-breed son by being sent into the ominous sounding Trench.  Flash forward to the present when that half-breed son Arthur, who has been secretly trained in Atlantian ways by Nuidis Vulko (Willem Dafoe), single handedly defeats a group of pirates attempting to hijack a Russian nuclear submarine.  When their leader, Jesse Kane (Michael Beach), is killed during the unsuccessful hijack attempt, his son David (Yahya Abdul-Mateen II) vows revenge—David it turns out is a mercenary in the employ of Orm (Patrick Wilson), Arthur’s younger half-brother and the King of Atlantis.  Orm has David engineer an attack on Atlantis as a pretext for declaring war on the surface world.  To succeed in such a war, Orm must unite the kingdoms under the sea.  His attempts are thwarted by Princess Mera (Amber Heard), originally Orm’s fiancée, who soon falls in love with Arthur. 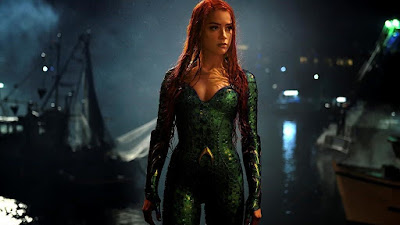 Amber Heard as Mera
Arthur, Mera, and Vulko team up to find the long lost Trident of Atlan, which can only be secured by the rightful King of Atlantis.
The Trident is, of course, not easily found, and the search for the mythical talisman drives the plot of the middle of film which sees David Kane return as Black Manta—a potential super villain counterpart to Black Panther—to hinder Arthur and Mera’s quest.  After multiple adventures that include a trek across the Sahara and a visit to Sicily, the two end up beneath the surface of the ocean, defeating a legion of amphibious creatures in the Trench, and facing down the Karathen, a gigantic monster who guards the trident.  Arthur claims the Trident and astride a seahorse leads an army of sea creatures to defeat Orm.  Along the way, he discovers his mother is still alive.  Atlanna returns to Thomas.  Orm is imprisoned, and Arthur agrees to become King of Atlantis. 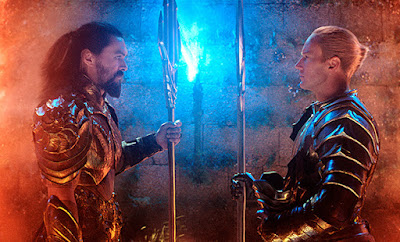 As superhero comics films go, Aquaman is nothing spectacular.  The plot wastes no time establishing a complicated backstory for its title character.  The film’s tone is uneven.  At times, the tone is serious; at times, tongue in cheek.  There are some throwaway lines of dialogue that are potentially funny, but both verbal and visual gags fall flat more often than not.  In one scene early in the film, when Arthur is confronted by three burly bikers in a bar, we expect the usual brawl that destroys the bar, but the three simply want to pose with Arthur for a selfie—which they incongruously snap using a shocking pink iPhone.  Arthur comes off as more than a bit thick; Mera is the brains of the duo.  Costumes hypersexualize the characters.  Momoa’s Aquaman seems to own no shirts; until he retrieves the Trident, he only wears waterproof form fitting vests to complement his skin tight waterproof jeans.  Heard’s outfits as Princess Mera are a study in aqua colored spandex. The pace of the film, which is too long by about half an hour, drags on and on until Arthur retrieves the Trident.  Then the action becomes a riot of CGI on overdrive as Arthur suddenly becomes Aquaman in a green and gold leaf costume, designed to leave nothing to the imagination, riding his seahorse and wielding the Trident to defeat a dizzying array of underwater enemies—so dizzying is that array that it is at times difficult to figure out who is fighting whom—or what.
The Arthurian elements are established by the title character’s first name, and by a variation on the traditionally problematic or unusual Arthurian parentage: for Ygraine and Uther read Atlanna and Thomas.  Aquaman, like Perceval in multiple versions of the Arthurian legend, initially defeats a knight in red armor—here, of course, a sea knight. While King Arthur’s last battle is usually with his illegitimate son Mordred, Aquaman’s last battle with his half-brother Orm is a close enough parallel.  Mera is part Guinevere, part good Morgan le Fay.  Vulko serves as Aquaman’s Merlin, and the Trident is, of course, the film’s Excalibur.  Malory has it that "whoso pulleth out this sword of this stone and anvil is rightwise king born.”  In Aquaman, the ability to retrieve the Trident similarly guarantees who is “rightwise king born” of Atlantis. Aquaman’s interrogation by the Karathen at times recalls that of Arthur and his knights by Mighty Tim in Monty Python and the Holy Grail.  In John Boorman’s Excalibur, Arthur learns that the secret of the Grail is that the land and the king are one.  In Aquaman, the title character declares that the land and the sea are one.
Aquaman wears its eco-politics lightly. The counterattack that Orm leads against earth deposits back on land all the garbage that has been dumped into the world’s oceans to pollute them.  But there is no real green agenda to the film, hidden or otherwise.  The slow pace of the film’s middle is partially compensated for by the dizzying pace of its ending.  While Orm is imprisoned at the end of the film in a room with a view (a running joke from earlier in the film), we know enough about the fate of surviving film villains that he will inevitably return, especially since, as the final credits roll, a snarling, and wounded, David Kane reappears still vowing to kill Aquaman for the death of his father—thereby laying the groundwork for a sequel—one has already been greenlit—if not for a cinematic franchise.
The Arthuriad has proven attractive to writers and illustrators of comics for a very long time, perhaps most famously in the case of Hal Foster’s comic strip, Prince Valiant, where the title character, a banished Nordic Prince of Thule, starts out as squire to Sir Gawain.  The comic strip premiered in 1937 and inspired two feature-length films, an animated television series, multiple comic book and bande dessinée series, and a role-playing game.
Aquaman’s characterization as a modern-day King Arthur does nothing to diminish the Arthuriad, rather it attests to its continuing elasticity.  Aquaman moves the Arthuriad into the world of comics and film superheroes.  And it won’t be the only film to do so.  This Spring promises another Hellboy film, with Milla Jovovich (who played Joan of Arc in the 1999 film The Messenger) as Nimue and Brian Gleeson as Merlin.  And, as if to prove further the prescience of Umberto Eco’s famous understatement in Travels in Hyperreality, “people seem to like the Middle Ages,” the “reel Middle Ages” as juvenilia will again soon be on display in Joe Cornish’s The Kid Who Would Be King, in which a group of young boys joins forces with Patrick Stewart’s Merlin to defeat Rebecca Ferguson’s Morgana and save the world, and in Dean DeBlois’s How to Train Your Dragon: The Hidden World, the third installment in the animated Viking film franchise.