Huckvale: A Green and Pagan Land 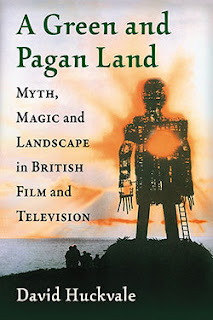 
Written by an author who has worked as a BBC radio presenter, script writer and researcher, this book is an unusual contribution to medievalism studies. Its stated aim is ‘to explore the British literature of pagan fantasy that foreshadowed so many celebrated British films’ and it offers a brisk filmography in the preface: oddly missing David Rudkin’s evocative made-for-TV Sir Gawain and the Green Knight (1991). The book does, in part, discuss the films listed here, with a particularly interesting final chapter on David Rudkin / Alan Clarke’s Penda’s Fen (1974), but it also ranges widely (indeed rather randomly) across a number of topics relating to pagan fantasy, landscape, and much else besides. The introduction, entitled ‘Into the Woods’ offers up some inconsequential examples of tree-lore and surveys some writers who have depicted woods and forests as sinister. Algernon Blackwood and J. R. R. Tolkien are invoked, and there is a quick overview of the history of mythic landscape from the nineteenth century onwards, culminating in a fogeyish lament for the ‘commercialization and kitschification of … folk traditions’. Chapter one rehearses the well-worn topos of the history of King Arthur. The author relies on nineteenth- and early twentieth-century retellings and summaries for his information; indeed, and problematically in places, source criticism is not a strong point of his approach. Thus, that Chaucer believed there was a ‘pagan aspect’ to Arthur is adduced from the ‘Wife of Bath’s Tale’ (cited directly from Keightley’s Fairy Mythology and without any consideration of Chaucer’s larger purposes in the Tale). Elsewhere in the chapter we learn that the pagan magic and landscape in Tennyson’s Idylls of the King ‘formed the basis of the Celtic revival – and that this turned increasingly away from Christianity’ (though a more historically nuanced account of nineteenth-century Celticism is given in a later chapter). Huckvale takes the Victorian idea of the pagan at face value, and does not ask how far this was either invented or romanticised. Of more interest here is a side-by-side reading of Tennyson’s Idylls and Wagner’s Ring. It is clear that Huckvale knows a great deal about music, and when he expands on Wagner and on British composers (in particular little-known figures such as Rutland Boughton and Granville Bantock) his writing is convincing and informative – even if the relationship of the music either to landscape or to British film and TV is often tangential at best. Eventually the chapter reaches Monty Python and the Holy Grail and Excalibur; here the discussion of landscape becomes a little more central.


The second chapter focuses on the Grail, and the topic of landscape of the Grail quest is better handled; the idea that ‘we are all Grails’ (p. 55) leads into a broadly Jungian reading of myth, though the question ‘what is myth if not a cliché?’ could have been broached with more nuance. Other broadly Grail-related medievalist works: Powys’ A Glastonbury Romance, or more loosely, Ken Russell’s The Lair of the White Worm, bits of Parsifal, Lindsay Clarke’s The Chymical Wedding and Garner’s The Owl Service are marshalled here. Later chapters examine the Green Man, Tristan and Isolde (with a slew of lesser-known works by British composers and poets under the influence of Wagner), the Celtic Twilight (with some lively discussion of The Wicker Man), Pan, Arcadia, The Golden Bough, witchcraft and, finally, Penda’s Fen. Much is shoehorned in here that has little to do with film, tv, fantasy or landscape particularly and connections often seem tenuous. So the Celtic Twilight chapter’s discussion of Yeats notes that a line of Cuchullain’s sounds rather like the formula by which Kullervo announces himself in the Kalevala (and in Sibelius’s Kullervo symphony); in fact it is a standard poetic formula by which a hero designates himself as being his father’s son. Huckvale does not suggest that Yeats might have read the Kalevala or have heard the symphony, but offers the relationship between Yeats’s faery- and myth-inspired writing and Arnold Bax as a comparison to Sibelius’s response to the Kalevala; he certainly does not consider the role of patronymics, heroic identity, poetic formulas in oral tradition or any of the other aspects of the shared connection that might appear salient. At the end of this chapter, a discussion about The Wicker Man, location-hunting as a way of tapping into the ambience and underlying creepiness of well-made horror films meshes well with thinking about psychogeography.


The chapter on Pan works rather better than some others, drawing a clear line from the Decadents’ re-discovery of Pan, via Arthur Machen, and Lord Dunsany to the films based on Dennis Wheatley’s novels. The Arcadia chapter is more loosely structured, yoking together retellings of classical myth and history in such diverse figures as Mary Renault and Walter Pater, along with the composers Granville Bantock and Gerald Finzi, culminating in Ray Harryhausen’s Jason and the Argonauts (1963) and Clash of the Titans (1981). Harryhausen’s debt to Victorian painters for his vision, nuggets of film-location lore and earlier and later filmed versions of Greek myth are compared. The Golden Bough chapter returns to The Wicker Man once again, while the penultimate chapter on witches at last engages with some of the best-known folk-horror films and TV programmes of the Seventies and beyond.


A Green and Pagan Land is a very mixed bag. It is the work of an enthusiastic amateur who knows a good deal about British composers and TV and film fantasy, and who has read quite widely in nineteenth- and twentieth-century fantasy fiction. It lacks any kind of theoretical orientation – apart from a quick dip of the toe into Jungian waters – and the author has clearly not read any other secondary literature about medievalism or British folk-tradition. If he had, he would perhaps have escaped some of the book’s many errors: among them: references to the Irish folk-epic ‘The Book of the Dun Cow’; ‘Mercia’ as the Roman name for a part of England; confusion of the Victorian Mary Anne Atwood and the considerably better-know Margaret Atwood; locating Donegal in Scotland; ‘hoards’ and ‘hordes’, and so on. Nor is the book particularly up to date; the section on London fantasy focusing on Peter Pan and Kensington Gardens might have opened up discussion of China Miéville and Ben Aaronovitch, but apart from a couple of recent films (often remakes), the material is mostly last century. Where the author follows his enthusiasms and has thoroughly researched and thought about his material, he does have some illuminating things to say, but, disappointingly, these do not particularly address the topics invoked in the book’s title.
Carolyne Larrington
St John's College, Oxford
Posted by Mikeinexile at 3:52 PM