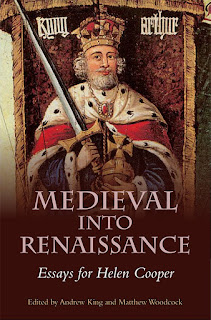 Professor Helen Cooper, the author of vital texts ranging from the recent Shakespeare and the Medieval World to her groundbreaking book, Pastoral: Mediaeval into Renaissance, consistently forces literary scholars to rethink and even reject labels of periodization for the Middle Ages and the Renaissance. This collection in her honor, a lovely thank-you note to Professor Helen Cooper from her former research students, so recreates the exciting entanglements and continuities of Cooper’s own work that even organizing a review of the essays is challenging. The richly researched offerings may focus on a topic or a trope, but they are also constantly engaging in periodization and genre and reception as well.

A bit more than half the essays in this collection explicitly interest themselves in reception, particularly how authors from the medieval and renaissance periods conceived of their works’ future readers. For example, Alexandra Gillespie argues that Chaucer models a “complex, self-reflexive, relentlessly ironizing mode of literary authorship” for Gower, Spenser, and Milton by tracing the play on the word “uncouth” in several earlier works (20). How the later poets interpret and allude to Chaucer demonstrates both their careful reading of his work and portrayal of authorship as well as their simultaneous investment in their own authorship and their future readers. The successful poet, the laureate, is considered in Mary Flannery’s study of John Skelton. In his explicit reflection on this role, Garland of Laurel, Skelton looks to the past for models while contemplating fearfully a future threat of obscurity. Andrew King similarly addresses the anxious author in his examination of Samuel Sheppard’s The Faerie King, a Civil War era poem that looks back to Spenser’s Faerie Queene while also nervously comparing the poet’s ambitions to those of the doomed Charles I. All three essays are rich examples of writers reading each other and reconsidering their themes. Such intertemporal influence appears in four other arguments in the collection that consider how readers and revisers give texts, tropes, and genres new purpose and life.


The adaptation studies in this collection combine considerable archival work with bold historicizing arguments. Helen Vincent reveals how thoroughly eighteenth-century rewritings of Sidney’s Arcadia adapted and refocused the poem to address their contemporary interests. She writes, “the story of Argulus and Parthenia both takes on the colours of contemporary conceptions of courtship and marriage and becomes an influential text in the development and propagation of those conceptions” (249). Sidney is novelized, reflecting the generic concerns of the age, and the doomed lovers become emblems of mutual desire and happy marriage, concepts with greater significance and cultural import in the eighteenth century. Megan Leitch’s investigation of Middle English prose romances argues that these prose works, frequently concerned with offspring who inherit bad traits, may be read as responses to more conventional romances; they are revisions that “kill the confidence in proper inheritance that infuses earlier popular romance” even as they demonstrate their reliance upon the worth of their predecessors (72). As in Vincent’s essay, this piece reveals just as much about the audience of these texts – merchants who relied upon learned virtue rather than aristocratic inheritance (61). In an even more explicit discussion of adaptation, Matthew Woodcock depicts how Thomas Churchyard tailors medieval de contempt mundi tropes for an Edwardian audience, resulting in literature that criticizes using a mix of medieval prophetic discourse and mid-Tudor language of justice and commonwealth while simultaneously redirecting attention to the complainer himself. Similarly, Joyce Boro argues that Swetnam the Woman-Hater adjusts its source material to associate misogyny with disease in order to diagnose the Jacobean court. The play recrafts the work of a famously misogynist pamphleteer and an adaptation of a late fifteenth-century Spanish romance by Juan de Flores to respond directly to the hypermasculine and dysfunctional court under James I.


The inherited text is not only read but remembered, both in the senses of recalled and reconstructed. One of the main continuities uncovered by the essays in this collection is that of readers remembering: remembering genres that now need tweaking, grieving places which no longer exist, and recalling commonplaces and sententiae from their youth. Personal and cultural memories create expectations that can be violated for impact or exploited for their emotional resonances, as several pieces demonstrate. Nandini Das, in her wide ranging discussion of travel narratives and poetry about Arcadia, argues that the space of Arcadia is both present and lost; it is a memory theater where early modern authors and travelers stored their idealized notions of the pastoral. Arcadia becomes shorthand for the meeting space between the real and the ideal, and it accomplishes this by existing only as a memory. In the same way, Jason Powell in the essay immediately following argues that Hamlet is full to bursting with moral sayings and fatherly advice, commonplaces that would echo in the minds of every audience member and create “extra-textual meaning” (171). However, the familiarity of Polonius’s advice, for example, only serves to make Old Hamlet and Claudius’s paternal suggestions to Hamlet all the more horrifying. The misuse of advice and the presence of bad fathers becomes its own tragic trope.


Audience and scholarly expectations of genre feature prominently in another group of essays. Once again we see examinations of influence and reception across periods, although here they might be contained within one of Professor Cooper’s own wheelhouses: the romance. R.W. Maslen, Aisling Byrne, and James Wade all focus on medieval and renaissance romances; their work reveals anew the ubiquity of this genre. Maslen’s piece, which encompasses Chaucer, Malory, the Pearl Poet, Spenser, and Shakespeare, traces the presence of bad armour in late chivalric romances. The bold reach of the piece reveals how common broken armour truly is, and the trope (or anti-meme, to use Maslen’s words) forces readerly attention to the vulnerability of the knight. Rather than taking on all English romances, Byrne uncovers how frequently early modern Irish audiences read medieval English romances. Her work on these poems’ circulation westward offers a persuasive argument for a “more thoroughly archipelagic approach” to their study (76). James Wade similarly challenges what we think we know about penitential romance by outlining the genre’s surge in popularity after the Reformation and its appearance in texts such as King Lear and The Faerie Queene.


Much like the recent Oxford Handbook of Tudor Literature, which argues convincingly against the labeling of the mid-Tudor period as “The Drab Age” by piling on insurmountable amounts of data to the contrary, this collection encourages the reader to defy the cliché of period labels and generic assumptions by using the irresistible weight of textual evidence. The broad perspective offered by these essays illuminates how closely intertwined the so-called “Dark Ages” and the frequently fetishized “Renaissance” were for contemporary readers and writers. As this collection proves, neither audiences nor authors saw these periods as distinct. Chaucer was just as relevant to Stuart poets as he was during his lifetime, and that recognition offers a corrective to the flawed understanding of poetry which suggests that medieval literature was replaced or supplanted or exceeded by later writing. Even when the collection’s arguments suffer from overreaching, they delight and inspire readers to make their own bigger and bolder claims and reject the scholarly silos we too frequently inhabit.