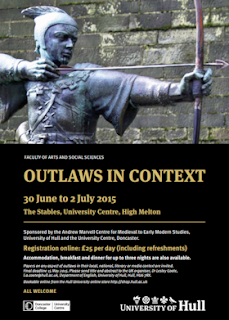 Reviewed by Valerie B. Johnson (valerie.johnson@lmc.gatech.edu)


The International Association for Robin Hood Studies meets biennially, alternating between North America and Europe; the subject of this review is the tenth meeting, “Outlaws in Context,” held 30 June – 2 July in Doncaster, UK. Doncaster is in South Yorkshire, and the area is considered prime “Robin Hood Country” due to local references in a number of early ballads, abundant references to Robin Hood in local site names, and a rich tradition of highwaymen (real and romanticized) through the 18th century.


“Outlaws in Context” offered seven sessions, with no concurrent panels to split the attention of attendees. Nineteen papers were presented, and enthusiastic conversations followed each panel. Like many organizations, the IARHS encourages the participation of graduate students alongside seasoned academics; however, the IARHS is also open to independent scholars or enthusiasts, and several routinely attend and present at the biennial conferences. This open approach mirrors the history of Robin Hood scholarship, and encourages a diversity of voices in discussions.


The European meetings of the IARHS are generally smaller and more intimate conferences than North American counterparts. Consequently, “Outlaws in Context” represents organizer Lesley Coote’s choice to replicate the success of past European meetings, such as Gregynog in 2007 and Beverley in 2011, by selecting a residential conference center as the site of the meeting. European meetings of the IARHS thus often qualify as “boutique conferences,” since their small size and centralized location ensures that all attendees can meet and speak to each other within formal and informal settings. This allows a rich exchange of ideas in various stages of development, and genuinely collaborative discourse. The North American meetings are often larger and by sheer size limit the depth of casual conversations even though they balance this through increased opportunities. (A notable exception to this trend was the 2013 meeting in St. Louis.) The great value of the small residential conference center is the natural flow and development of the conversation. A discussion begun over breakfast can flow into panel presentations and questions, continue during lunch, and further resonate in afternoon conversations.


Presenters and audience members were able to make connections between papers throughout the conference. Because Robin Hood is a subject well suited to historical, literary, and media study, the range of attendees is typically quite broad: medievalists are the largest contingent by far, with eighteenth century studies and modern media studies rounding out the remainder. The IARHS is not limited to members of the academy alone; at any meeting, independent scholars, dedicated enthusiasts, and casual fans are present, offering a more inclusive model for scholarly conferences of the future.


The conference theme sought to showcase the increasing diversity of topics within Robin Hood studies. When the historian J.C. Holt published Robin Hood (1982), few scholars interested in Robin Hood wrote on topics outside history or historiography, and the overwhelming majority of scholarship focused on the late medieval / early modern materials. Holt’s work, however, provided such a thorough foundation in the historical facts of the tradition that it accomplished what few monographs researched and written for academic audiences can hope to do: it was eagerly read outside the academy. Over the next decade Holt’s Robin Hood was cited as inspiration and research by novelists (such as Robin McKinley, author of The Outlaws of Sherwood) and filmmakers (such as Richard Carpenter, Robin of Sherwood) who sought out historical context and details of the tradition to better situate their own interpretations of the tradition.


Consequently, “Outlaws in Context” sorted papers as much by common material history and shared textual connections as by thematic topics. For newcomers, this meant that context (historical, thematic, genre, etc.) and shared vocabulary generally built over the course of the presentations. Question and answer sessions, therefore, rarely had to address basic concerns and were able to develop the discussions in greater depth than isolated panels or papers addressing the Robin Hood tradition would be able to accomplish. More crowded meetings of the IARHS do offer a broader depth and range of papers, but – due to the size which permits such variety – the conversations are necessarily limited since not all audience members have equal chances to attend all the panels.

The conference opened, for example, with a pair of keynotes addressing two radically different views of Robin Hood within the context and restrictions of television programming: Mikee Deloney examined parallels between Robin Hood and Jamie Fraser, hero of the popular Outlander television series (a connection made in the source novels, but developed in more depth by cinematography’s shared visual vocabulary); Michael Easton provided a discussion of the writers and directors of the immensely influential 1950s television series The Adventures of Robin Hood. The shared medium of television allowed the group to dig into the appeal of outlawry, whether for a fictional character like Fraser or the writers and directors of the television series – several of whom were Americans blacklisted by the McCarthy investigations. Outlander and The Adventures of Robin Hood both adjust the expectations and requirements of outlawry to fit the needs of their genres, since Outlander is adapting a novel and furthermore a cable production running for a full hour. Outlander’s 16 episodes per season pales in comparison to Adventures of Robin Hood’s seasonal average of 39 episodes, which were produced serially and loosely adapt traditional stories and adventures, but without the deliberate narrative arc of the Outlander series.


From my perspective, the shared keynote address signals several important moves in Robin Hood studies – as well as larger issues in medieval studies and academia. First, and most importantly, is the increasing interest in visual representations of the tradition among scholars of literature and history. Scholars in these fields have long noted Robin Hood’s dynamic visual presence as a key factor in the tradition’s ongoing appeal on stage and screen, but study of television programs has never featured as prominently as cinematic offerings. Perhaps this reluctance by medievalists to take up television stories (proportionally to our embrace of cinema) is the fault of serial narratives and the sheer bulk of material: the 1950s television series, for example, produced 39 episodes per year for four years, and many of those episodes function more effectively as standalone stories, with different directors, writers, editors, and actors contributing to the viewing experience. Fragmentation is also at play in Outlander, because a portion of the appeal of the male lead derives from the character’s resonance with Robin Hood – but since the character’s name is not Robin Hood, James Fraser’s connections to the tradition must be largely meta-textual, with brief and disconnected references that do not touch on the most obvious symbolism of the tradition. These references depend on common knowledge, even tropes, about Robin Hood; but they also depend on the audience’s flexibility and willingness to adapt Robin Hood to many different contexts. Medievalists, of course, often participate in these conversations – but often we return to source material, a move that often disadvantages modern stories and histories in favor of those originating in the Middle Ages. Clearly, a portion of this is due to specialist bias: a medievalist will naturally privilege her own field over modern television studies! However, these stories are not being told for medievalists, and only incidentally to medievalists: we can join a conversation and contribute fruitfully, or derail the discussion by insisting on medieval origins for material that has embraced the medieval and also moved in medievalism, neo-medievalism, and at times outright modernism.


The various panels and discussions in “Outlaws in Context” shows that unity, for these stories, is derived through common factors of the narratives, audience desire, and distribution of media: consistency of transmission times and channels is a factor which cinematic scholarship does not need to consider at all. Yet these concerns are all adaptations, or translations, of issues that have informed the gradual accretion of the core content that we now consider the greater Robin Hood tradition – and the stories developed out of these material contexts of audiences and storytellers. This encourages localization, and to some extent fragmentation: this conference shows that any discussion of “Robin Hood” has to be very careful to localize and specialize the conversation, since there is so little that is shared in common across the broad range of places, times, texts, and references. Sometimes all that makes a Robin Hood text is the name – or the act of extra-juridical resistance to unjust authority. This broadening of who and what Robin Hood can “be” is, I think, representative not only of the increasing options available for modern audiences, but increasing acknowledgment by scholars that multiplicity of meaning is not only possible but vital.

Posted by Mikeinexile at 2:53 PM