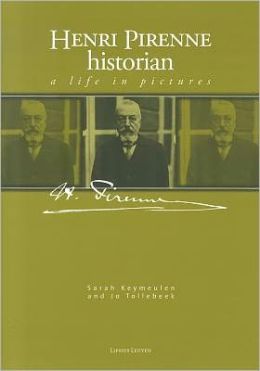 Was there one Henri Pirenne beneath historians' many Henri Pirennes, and if so, who was he?  Medievalists look to his original research on the development of cities, and, of course, Mohammed and Charlemagne, his novel argument for the demise of the western Roman Empire.   That work engendered controversy when it was published, posthumously, in 1937; and it has been (ab)used for political purposes for more than 70 years, first as a tool for advancing Nazi ideology[1] and now as fuel for anti-Islamic arguments.[2]  Others see a national historian, the author of a monumental seven-volume work intent on rooting the Belgian nation in the distant past; still others associate him with methodological and analytic progress in economic and social history[3] or his general History of Europe, republished most recently in 2008.  The renowned Dutch scholar, Pieter Geyl -- while critical of the underlying argument of Pirenne's history of Belgium (because it contradicted Geyl's "Greater Nederlandish thesis") -- found the scholarship "impressive," but thought of Pirenne mainly as a historiographer.[4]   Pirenne's son Jacques, also a noted historian, remarked that specialists had either lost sight of -- or had never gained an appreciation for -- the coherence of the large and diverse corpus of his father's work.[5]

This small, elegant and insightful book makes it easy to appreciate the integral man and his scholarship.  It draws heavily on the Pirenne archives at the Université libre de Bruxelles (ULB) and the Ghent University Library, both of which have recently had exhibitions focused on material in their holdings.[6]   In about 50 pages of text (pictures, reproductions of documents and diary pages, chronologies and bibliographies take up the greater part of the book's 120 pages) it locates Pirenne in his time and place, in European events and in the world of academic historians in Europe, especially in Germany, France and the Netherlands.  The influences on his ideas, methods of research and narrative style are suggested through his experiences and connections, rather than textual analysis.

There is as much or more of substance here on the formative and transformative experiences that helped to shape the choices of subject and orientation of Pirenne's œuvre than could be found in some full-length biographies.[7]  The description of his family and early education is followed by a close and well-documented account of his turn toward history -- and specific subjects in history -- even while adhering to his father's wish that he study law.  In pages reproduced from his diary, the authors allow Pirenne to express the thinking that led him to the work that would come to define him.  A month before his twentieth birthday, Pirenne noted that he was captivated by the history of medieval municipalities:  "I believe that later on, when I am a lawyer, these studies will form a part of the national heritage, . . . into which I will conduct research and in which I will try to achieve something" (p. 23).  He followed a doctorate in history at the age of 20 (roughly equivalent to a Master's degree in the U.S.) with a thesis on the establishment in the Middle Ages of the town of Dinant, with studies in France and Germany; and he opened himself to the intellectual influence of Karl Lamprecht and others.

By World War I Pirenne's reputation in Europe as well as Belgium was so great, and the public expressions of his patriotism so vigorous, that the country's occupiers feared his influence and interned him in Germany.   Germany's actions in the war, coupled with a jingoistic turn by many prominent historians, including Pirenne's erstwhile friend, Lamprecht, led him to reassess not only some of his personal and professional ties but also the methodological and intellectual influence of his German associates.  While his internment was far from arduous -- he had access to university libraries in the region to which he was limited;  good food and Havana cigars; and opportunities to teach and write (and to learn Russian) -- his disappointment that nationalist cant and rationalization subordinated intellectual and professional values muted his commitment to national history.  Although he completed his seven volume history of Belgium, his attention was increasingly directed toward European history.  This move was encouraged by sometimes intemperate criticisms of his national history by Geyl and others outside Belgium; Pirenne then turned to Mahomet et Charlemagne, which he saw, in Keymeulen and Tollebeek's words "as his 'spiritual testament'" (p. 96).

Is that testament in danger of being hugged to death by anti-Islamists in the United States and Europe?  Googling Mohammed and Charlemagne today quickly brings up a book by an Emmet Scott (background obscure), marketed by an equally obscure publisher of ultraconservative books and periodicals, with little or no presence among scholars of any sort, anywhere.  Most of the comments about the book on Amazon's web site suggest that Pirenne's name and work are living a strange and disturbing life.  Keymeulen and Tollebeek convincingly show Pirenne's abhorrence of nationalistic and sectarian sentiments, so it can be said with confidence that he would be aghast.


University of Maryland
[1] Henri Pirenne, Historian:  A Life in Pictures (Leuven:  Lipsius Leuven/Leuven University Press, 2012), pp. 104-5,
[2] Most notably, Emmet Scott, Mohammed and Charlemagne Revisited:  The History of a Controversy (Nashville:  New English Press, 2012).
[3] Erik Thoen and Eric Vanhaute, "Pirenne and economic and social theory:  influences, methods and reception," Revue belge d'Histoire contemporaine/Belgisch Tijdschrift voor Nieuwste Geschiedenis, 41, 3-4 (2011):  323-353.   This article appeared in a special issue of the journal, Henri Pirenne:  un historien belge face au développement des sciences sociales et historiques, eds. M. Boone, C. Billen and S. Keymeulen.
[4] Personal conversations, Utrecht, January 1964.  See also Henri Pirenne, historian, pp. 95-96..
[5] Personal conversations; Brussels, October - December 1963.  See also Martha Howell's one-page Preface to the work under review.
[6] Since 2005, most of Pirenne's papers, as well as pictorial and documentary material, have been in the public domain.  Much of it has been digitized, accessible here. Pirenne held a professorship at Ghent from 1885 (when he was 24 !) until 1930, when the university instituted a Nederlands-only policy (for most in practice still Flemish then) as the language of instruction.  Although he probably could have developed the polished command of the language to teach at the elegant level he demanded of himself, he chose to take early retirement (at the age of 67).   He left in part as a matter of principle against what he saw as enforced provincialism and in part for personal convenience.
[7] The best known biography in English is Bryce Lyon, Henri Pirenne.  A Biographical and Intellectual Study (Ghent:  E. Story-Scientia, 1974.)  Keymeulen and Tollebeek are somewhat critical of Lyon's rather hagiographic work, as was Elizabeth A. R. Brown in her review essay in History and Theory 15, 1 (1976):  66-76.
Posted by Mikeinexile at 10:08 AM