Tolkien: The Fall of Arthur 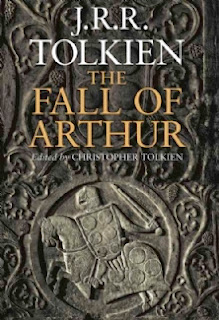 Imagine Sir Thomas Malory pouring over the alliterative poem before him, reveling in its contagious rhythms, until the cataclysmic fall of Arthur causes him to stop short. Arthur has just ravaged the Italian countryside, led his glorious knights to their deaths, and even ordered his enemy’s children to be tossed into the sea. What might happen, Malory wonders, if he were to replace these undesirable episodes of violence and tyranny with investigations of the psyches of his beloved Guinevere, her lover Lancelot, and the lecherous Mordred, all the while retaining the sonorous sounds of war through alliterative verse? For those of us who know Malory’s treatment of the Roman campaign, this speculation is easy to imagine, especially since he drew his material for this section directly from the alliterative Morte Arthure. If this is the first tale Malory composed, as Eugène Vinaver suggests, this challenge is answered with a compromise between prose and poetry, which embraces the psychological plotlines from his “French books” and jettisons the strict cadences of alliterative long lines.[1]

Almost five hundred years later, J.R.R. Tolkien must have been grappling with the same question. And with the publication of The Fall of Arthur, we know that his answer was strikingly different. Within this unfinished poem, we witness Tolkien’s attempt to versify Malory’s conflation of the betrayals of Mordred and Lancelot through the undulating dactyls of alliterative poetry. The result is a militarized, yet dimly-lit, romance that offers unprecedented access into the conflicted hearts of Arthur and Guinevere, who both yearn for the return of the Lord of Benwick, Sir Lancelot. While Mordred’s aggressive pursuit of Arthur’s queen sets the sovereign’s vengeance in motion, it is the transparent musings of the illicit lovers that will grip Tolkien’s audiences.

With the “ruthless” disposition of The Hobbit’s Smaug the Golden, Guinevere avariciously prizes Lancelot above all, causing “woe” for men and complicating her conventional restraint. The stanza even concludes with the enigmatic, “Strong oaths they broke” (III.62), which suggests a mutual violation, either of their love for each other or their loyalty to Arthur. As editor Christopher Tolkien notes, an earlier draft that read “Strong oaths she broke” [my emphasis] had been replaced with “Strong oaths they broke” [my emphasis], providing further evidence that Guinevere’s culpability was a central concern (184). Yet, in a previous draft of his characterization of Guinevere as “fair as fay-woman” (III.75), Tolkien labeled her “fair and faultless” (181) indicating an early agenda of recuperation of this much-maligned queen.

A she-dragon “with gleaming limbs” (II.27) guarding her hoarded love, nevertheless, is the image that remains. It is probable, I would submit, that this symbol occurred to Tolkien in his reading of the alliterative Morte Arthure. A dragon appears promiscuously throughout the poem, representing both Arthur in his first dream (786-832) and the Roman legions as a heraldic device (1251-2; 2026-7; 2052-7).[2] The Morte-poet’s obsession with descriptions of battle standards reemerges in Tolkien’s amplification of the grandeur of battle through heraldic ekphrasis:

Dragon-prowed they drive   over dark billows;
on shores unguarded   shields are gleaming
and black banners   borne amid trumpets. (I.157-9)

More than any other symbol, the dragon pervades the poem, unfortunately to its detriment. In contrast to the variation and portability of the alliterative Morte’s heraldic descriptions, “dragon-prowed” is thrice-repeated and applied redundantly to Prydwen, Arthur’s ship (I.157; II.8; IV.177). With the exception of the abrupt ending at Romeril, the needless repetition of stock phrases such as “Dawn came dimly (III.193; IV.15) mark this brief poem as unpolished work.

Christopher Tolkien, however, provides some solace to the unsatisfied reader by appending to the poem a compelling section, “The Unwritten Poem and its Relation to the Silmarillion,” in which he attempts to reconstruct the future directions of the poem from the nearly illegible notes left behind. In addition to a provocative discussion of the connections between the Arthurian Avalon and the Silmarillion’s Tol Eressëa (137-63), Christopher Tolkien demonstrates the early use his father was making of the alliterative Morte. For example, whereas Arthur’s lament over the death of Gawain in the Morte includes the lines “A! dowttouse derfe dede, thous duellis to longe! / Why drawes thou so one dreghe? thow drownnes my herte!” (130), one draft among his notes attempts a close translation: “Ah, dread death thou dwellest too long, / thou drownest my heart ere I die” (131).[3] This exercise and the later drafts of the poem suggest that Tolkien was interested in reducing the alliterative long lines of the Morte to the shorter staves of Anglo-Saxon verse. And in a subsequent instance, he even inserts Beowulf into the scene of Arthur’s mourning, in which Sir Iwain chides his king by saying, “to weep as a woman is not wit holden / better vengeance than lament” (132). Whereas the Morte provides the first line, “To wepe als a woman, it es no witt holden,” the second line likely comes from Beowulf’s speech to Hrothgar, “Selre bið æghwæm, / þæt his freond wrece, þonne he flea murne” [Better is it for every man / that he should avenge his friend than he should much lament] (132). Apparently, Tolkien was happily raiding two alliterative word-hoards, remixing their content and rhythms for the best possible effects.

Without Christopher Tolkien’s accompanying commentary, The Fall of Arthur seems less remarkable, and at times disappointing. This is no doubt why he chose to surround this short poem of 954 lines with so much supplementary material. Yet, the amount of commentary, which ranges from a “Foreword” and “Notes on the Text of The Fall of Arthur” to essays on “The Poem in Arthurian Tradition,” “The Evolution of the Poem,” and Old English Verse,” is excessive, especially for a poem that had no previous public life. Taken as a whole, this book is comprised of a commentary that often overwhelms – and is in danger of over-determining – its text. While Tolkien enthusiasts will likely enjoy this new Arthurian context for the Mirkwood of Middle-earth, I am reminded of Morton Bloomfield’s clever characterization of Piers Plowman. He says that experiencing this often-mystifying alliterative poem is “like reading a commentary upon an unknown text.”[4] Until now The Fall of Arthur has been an “unknown text.” And while its commentary is often useful and provocative, it fails to distinguish itself from the text, making it difficult for the reader to evaluate the poem on its own merits.