Brown and Williams: The Mab: Eleven Epic Stories from the Mabinogi 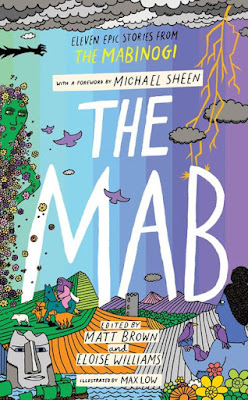 The Mab announces itself as a collection of retellings for young readers, but it would be more accurate to call it an adaptation of the medieval Welsh tales rather than retellings. Telling a story again may introduce changes but does not necessitate them, whereas adaptation requires change. According to Linda Hutcheon’s A Theory of Adaptation (2nd ed., Routledge, 2013), an adaptation is a re-visioning based on alterations to its sources. All adaptations, says Hutcheon, are made in a “creative as well as an interpretive context that is ideological, social, historical, cultural, personal, and aesthetic” (p. 109), and a new interpretive context mandates change. Like its source, in other words, an adaptation is a work of a particular time and place. In the case of The Mab, a twenty-first century iteration of tales first written down in the twelfth or thirteenth century, the changes incorporate a shift of genre, context, audience, tone, point of view, characterization, theme, and ideology.

The Mab is not the first children’s version of the eleven medieval Welsh tales known collectively as the Mabinogion. That honor goes to Sidney Lanier’s The Boy’s Mabinogion (1881), a highly bowdlerized edition of Lady Charlotte Guest’s English translation (1838-1849). Throughout the 19th and 20th centuries, dozens of children’s books included retellings of one or more of the stories. The tales were first translated into English by Lady Charlotte Guest, who was considerably more capable than native Welsh scholars have suggested. (For a discussion of the many literary crimes these mostly male Welsh academics have accused Lady Charlotte of perpetrating, see my essays “The Crimes of Lady Charlotte Guest,” Proceedings of the Harvard Celtic Colloquium 15, Harvard University, 1995, pp. 242-49 and “The Further Crimes of Lady Charlotte Guest,” Proceedings of the Harvard Celtic Colloquium 17, Harvard University, 1996, pp. 157-66.) Four of the medieval tales are clearly linked by recurring characters, plot references, and a formulaic ending: “And , so ends this branch of the Mabinogi” (Sioned Davies, ed., The Mabinogion, Oxford University Press, 2007, p. 46). These four tales comprise the Four Branches of the Mabinogi, and the other seven are a hodgepodge of early and late Arthurian tales, dream visions, and pseudo history—all collected and written down by different scribes in different decades. The only commonalities among the eleven stories are that they are all Welsh tales and that scribes bound parts of them together in several different medieval manuscripts, most notably two romantic-sounding 14th-century manuscripts known as The White Book of Rhydderch and The Red Book of Hergest. Lady Charlotte dubbed her translation The Mabinogion because of an error at the end of the First Branch in one medieval manuscript; the scribe mistakenly wrote “mabinogion” instead of “mabinogi,” and Lady Charlotte assumed the former was the plural form. The popularity of her translation ensured that the name became permanent. Modern Welsh scholars tend to use the word “mabinogi” to refer only to the Four Branches and “mabinogion” to refer to the entire collection of stories. The adaptors of The Mab ignore the word “mabinogion” entirely and refer to the collection as a whole as the Mabinogi, which misleadingly suggests that all the stories are closely related to one another. However, only the most nitpicky of Welsh scholars would quibble over this usage.

As an adaptation, The Mab is a creative act of reinterpretation, and the eleven children’s writers who have tackled this version of the Mabinogion have reinterpreted their chosen tales in a variety of ways. This approach is in keeping with the medieval manuscripts in that, as Welsh professor Sioned Davies tells us, the original tales “vary as regards date, authorship, sources, content, structure, and style” (Davies, p. x). Since the source material is itself varied, it is appropriate for the modern writers to approach storytelling in idiosyncratic ways. They all strive to maintain language and content suitable for children aged 9-12, but each writer has a distinctive style.

Because each story has a different author, the tone, theme, point of view, and characterization differ from one story to the next. Matt Brown’s “Rhiannon, Pwyll and the Hideous Claw: A Retelling of the First Branch of the Mabinogi” has a lightly humorous tone with a running gag about trousers, while Sophie Anderson’s “Branwen and the Cauldron of Rebirth: A Retelling of the Second Branch of the Mabinogi” evokes a poetic melancholy while belaboring the power of love—very different from the action adventure of its source. The most extreme character changes occur in Nicole Davies’s “Happily Ever After: A Retelling of the Third Branch of the Mabinogi.” The original tale focuses on the wisdom, intelligence, and perseverance of Manawydan, a Welsh prince. Davies transfers most of his qualities to Cigfa, her first-person narrator, who is Manawydan’s daughter-in-law. In the medieval tale, Cigfa epitomizes the wet blanket cliché: she is fearful, and she whines and complains about everything. Davies turns her into a strong woman capable of agency while Manawydan becomes a bit of a wimp. Davies adds feminist ideology that fits uncomfortably in its medieval setting. Perhaps I am being unfair to Davies, however, because Manawydan is my favorite character in the Mabinogion. He’s a quiet, capable man who always figures out what to do, and I don’t like to see him emasculated.

Although we have no way of knowing how the tales were originally told, the sexual content of the medieval manuscripts suggests an adult audience. To make the stories suitable for modern children, the adaptors of The Mab have omitted a lot of material. Bowdlerization is a standard practice when adapting material for children, although Gwyn Thomas and Kevin Crossley-Holland’s Tales from the Mabinogion, an illustrated children’s book published in 1984, is astonishingly blunt about the sexual content of its source material. Society seems to have become more prudish since 1984. Nobody finds rape and incest suitable topics for a contemporary children’s story, so The Mab does not include the rape of Goewin in the Fourth Branch or the subsequent punishment of the rapist and his brother (transformed into male and female animals and forced to mate with each other). Only selected portions of each tale are included, and most of the familial links are left out. Family relationships are particularly obscure in Eloise Williams’s “Meadowsweet and Magic: A Retelling of the Fourth Branch of the Mabinogi,” despite the fact that relationships between uncles and nephews are the foundation of the Fourth Branch. Readers of Williams’s story do not realize that in the original tale the wizard Gwydion helps Lleu because Lleu is his nephew and Gwydion has raised him from birth. In Williams’s version, Lleu’s random wish finds its way to Gwydion, who grants the wish simply because he has time on his hands.

Each contributor of The Mab focuses on a single episode in his or her selected tale, an appropriate approach to converting long, meandering medieval tales into modern short stories for children. The Four Branches, which are episodic in the original, fare better than the other tales in this respect. Most of the other stories seem to end abruptly in the middle of the tale, particularly the three French-influenced Arthurian tales. The retelling of “Culhwch and Olwen,” the most Welsh of the Arthurian tales, works better because, like the Four Branches, it is already episodic in structure. Claire Fayers’s “The Strange and Spectacular Dream of Rhonabwy the Restless: A Retelling of the Dream of Rhonabwy” works as a complete story only by drastic manipulation of the source.

The least successful stories in The Mab are the retellings of the three French-influenced Arthurian tales about the knights Peredur, Owain, and Geraint; “The Dream of the Emperor Maxen”; and “Lludd and Llefelys.” In the case of “Lludd and Llefelys,” Zillah Bethel’s present-tense reinterpretation of the story creates a mystical tone that turns the straightforward original into a set of choppy, confusing scenes that culminate in a moral lesson for King Lludd. The other stories suffer from abrupt endings that make it clear the writers are only telling part of the story. All these stories lack the background context that is provided in their sources.

Although the stories in The Mab differ greatly from their medieval sources, they retain the Welsh names, which Anglophone readers may find difficult, thus requiring a pronunciation guide at the end of the book, and the writers tell lively, PG-rated stories. According to Hutcheon, adaptations have to work both for knowing audiences and for audiences that are unfamiliar with the original sources. The Mab works best for an unfamiliar audience that does not get bogged down in fidelity discourse. Max Low’s illustrations are colorful and slightly cartoonish, and they complement the tales nicely. One of the outstanding features of The Mab is that it is bilingual: each story is followed immediately by a modern Welsh translation. The Welsh people put a lot of effort into keeping their native language alive, so I’m glad to see the editors provide Welsh versions of these native Welsh tales. Some schools in Wales provide instruction via the Welsh language, so Welsh-speaking children will appreciate reading their native tales in their native tongue.

Posted by Mikeinexile at 5:36 PM