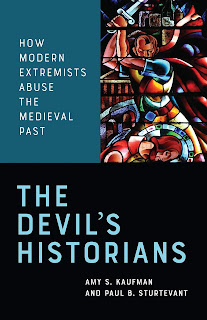 Review of Amy S. Kaufman and Paul B. Sturtevant, The Devil’s Historians: How Modern Extremists Abuse the Medieval Past (Toronto: University of Toronto Press, 2020), 198 pages.

This is a fascinating book covering a large swath of both the sub-field of medieval studies called “Medievalism” and the new field within historical studies called “Future History.” Medievalism is the study of how contemporary society uses, and in this case “abuses,” the medieval past. Future history is both the study of how we use the past, all of our past, in our contemporary view of the future as well as how we preserve the past for the future. Kaufman and Sturtevant have created an eye-opening study of how extremists “promoting white supremacy, religious violence, racism, homophobia, and patriarchal oppression” (p. 151) have used an altered version of the Middle Ages to undergird and promote their ideas. Carole Rawcliffe has traced much of the start of this alteration to “the scholars and sanitary campaigners of Victorian England (Rawclffe, Urban Bodies: Communal Health in Late Medieval English Towns and Cities (Woodbridge: Boydell, 2013), p. 12, see chapter one, “Less Mud-Slinging and More Facts”). No matter the start, the use and abuse of medieval terminology, ideals, symbols, and religions have been coopted by contemporary people to illustrate or foment their own ideas; they want to strike a chord with their listeners and medieval tropes serve that purpose.

Kaufman and Sturtevant have a depth here of contemporary U.S. politics in this volume that will appeal to many who have followed the recent election of 2020, but they have not limited themselves to the United States. They cover politics and political movements, especially extremists’ movements, in many other countries across the globe. Featured movements from India, the Middle East, China, Africa, and others around the world are illustrated in their use of medieval European imagery and tropes to get across the point that they are the bravest or most dominant or godliest and so on. They use images of knights, princesses, Joan of Arc, St. George and his dragon, other dragons, swords, Celtic knots, and other biblical elements that evoke an army of God. They often use medievalism images alongside real medieval images—rearranging medieval ideas to suit their own notion of what the Middle Ages was or should have been.

The authors do chronicle the long fight that medieval historians have put up against such rewriting and misunderstanding. “As far back as the 1980s, scholars like Morton W. Bloomfield and Eugene D. Genovese were reflecting on the ways southern American slaveholders indulged in a fantasy of neomedieval ‘feudalism’ to justify slavery and racism” (p.92).

This is an important overview of both extremism in society today and its use of medieval symbols, folktales, and rewritten history by these groups to justify everything from degradation of women to racism to the arbitrary construct of two genders. I found the writing to be a little “chatty,” at times, distracting from an otherwise important argument. I think my students, though, would find it engaging and honest. While here and there, the text becomes a little overbearing if not preachy, it is high time someone pushed back against what has become a predominately untrue image of the Middle Ages.