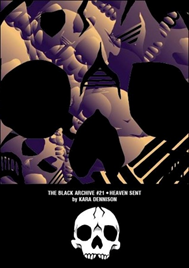 Kara Dennison’s Heaven Sent stands as the 21st installment in The Black Archive, a series commissioned by Obverse Books. The series offers book-length studies of single Doctor Who episodes. Contributions to the Archive span the television show’s impressive airing history, including episodes in the first long series run from 1963-1989 as well as the latest episodes in the current run of the rebooted series that began in 2005. Heaven Sent is an extended exploration of the eponymous 2015 episode starring Peter Capaldi’s Twelfth Doctor.[1] This episode is set inside a medievalesque clockwork castle that contextualizes an astronomically long, recursive journey through countless instances of confession and reincarnation. Dennison does not focus on medieval symbols or spirituality specifically in her book, but her analysis of the castle setting and the episode’s treatment of confession and rebirth (both physical and spiritual) is likely to draw the attention of anyone whose research interests include medievalism.

Like Dennison’s book, this review must include a short summary of the primary material at hand. The episode focuses almost solely upon the character development of one of the most complex psyches in television history. At the beginning of the episode, the Doctor appears in a teleportation chamber that has placed him inside his own Confession Dial, a piece of Time Lord technology meant to record a last will and testament. The Doctor’s Confession Dial contains a moated clockwork castle filled with shifting, labyrinthine corridors and rooms. The only other creature in the castle is a faceless specter-like figure called “the Veil,” who lumbers after the Doctor as he tries to escape the Dial. As the Doctor flees through various parts of the castle, he finds clues that, he eventually realizes, he must have left for himself in the past. The Doctor learns that the Veil is impeded by confession and that self-disclosure can spark a shift in the castle’s clockwork mechanism. Every time the Doctor confesses a secret, the castle rearranges its floorplan. When the Veil finally reaches the Doctor, its touch is so injurious that the Time Lord must crawl back to the teleportation chamber in which he first arrived and use his dying body’s energy to reactivate the teleportation device. The Doctor burns himself away and is reincarnated by the chamber, only to navigate a reset castle configuration once again. It becomes clear that the Confession Dial is being used as a torture mechanism by Time Lords hoping to glean information about a nebulous prophecy involving the Hybrid, an unidentified creature that will stand over the ruins of the Doctor’s home planet. The Doctor, ever stubborn, becomes intent on escaping the Dial instead of satisfying the Time Lords. Consequently, the cycle lasts a veritable eternity for the Doctor: over four and a half billion years.[2] During this time, once during every reset, the Doctor manages to punch an Azbantium[3] wall labeled “HOME” in the subterranean heart of the castle. This wall, the Doctor believes, hides a pathway out of the Dial. Ultimately, the Doctor pummels his way through the Azbantium and absconds with his unconfessed secret. He later tells the Time Lords who trapped him in the Dial that the Hybrid foretold in the prophecy is “Me.”[4]

Dennison reads Heaven Sent through Jungian symbolism, beginning the first chapter with a comparison between the Doctor’s multi-storied castle and Carl Jung’s depiction of the human psyche as a house.[5] The connection between the castle and Jung’s house is evident, as the Doctor’s castle maps loosely onto Jung’s construct. The top of the castle, where the Doctor observes the stars and calculates how much time has passed in the Dial, does seem to be the highest point of the engineering-oriented Twelfth Doctor’s conscious mind, while some of the lower parts of the castle could easily be read as reflections of the Doctor’s subconscious. Dennison is quick to note, though, that the shifts in the castle following the Doctor’s confessions, coupled with the inscrutable positions of several of the interior rooms in the structure, complicate the Jungian house model. The Doctor’s movement through his own psyche is therefore not vertical as in Jung’s illustration but confusingly “staggered” (16). Like the mutable spaces of the castle, the Doctor’s mind is more difficult to map than the domestic pathways of human thought. The ambiguities of this clockwork space contain a puzzle that only the Doctor can hope to fathom. [6] This is a perfect bespoke challenge for Capaldi’s Twelfth Doctor, “an incarnation that is not only willing to turn inward and analyse himself, but really quite desperate to” (23). This self-reflection is achieved through the innumerable confessions the Doctor makes to stall the Veil.

Confession is the result of the Doctor unraveling his own mind and the key to both his literal and metaphorical freedom. The refusal to confess fully and be absolved, Dennison observes, fashions the Dial into a sort of sci-fi purgatory that fosters character development in lieu of admission to paradise. Dennison cites the links among purgatorial temporal loops, confession, and character development in several other instances of pop culture: Stephen King’s short story “That Feeling, You Can Only Say What It Is in French” is a poignant example. The revelation of a temporal loop in the works Dennison mentions is always accompanied by a sense of dawning horror, usually experienced by protagonist and audience member simultaneously. Temporal loops tend to serve as climactic revelations, narrative ends in themselves, as characters discover that they are being punished for sins from which they have not been absolved. In Dennison’s analysis, the Doctor’s temporal loop, though certainly horrific, exists to achieve a more omphalic end: the loop drives the Doctor to acknowledge and explore his Jungian Shadow self. A confrontation with his Shadow self, Dennison explains, is possible only through confession and is catalyzed by the deadly Veil: “[W]ith the Veil, we do not see the Doctor’s fear and hatred of his own darker tendencies manifest. Rather, we see a creeping, rotting terror whose job is to bring those fears and darker tendencies to the surface in his own words. [The Veil] isn’t technically his Shadow herself—but she does give it form” (31). Additionally, the Veil prompts confession at the threat of imminent death. She is a slow-moving Danse Macabre, reminding the Doctor of his mortality and failures. Yet, she also makes the promise of reincarnation the ironic method by which the Doctor can continue to encounter a mortal self that is, for all intents and purposes, immortal given its ability to rematerialize in the Confession Dial and to regenerate in the wider universe (31). The Veil, like an exceptionally dour priest, confirms the link between a confession and rebirth that will lead to the fulfilment of a greater plan.

Dennison stresses that the Time Lords intentionally facilitate the Doctor’s reincarnations as a way to coax confession from an extremely defiant individual (37). The structure of the castle itself thus becomes a microcosmic gesture—if not to divinity, then to a certain kind of intelligent design that uses resurrection to realize a goal. It is interesting, however, that Dennison steers clear of Christian associations with resurrection and incarnation, associations we might expect with a castle that contains purgatorial punishment and appears in an episode named Heaven Sent. In fact, Dennison seems to purposefully avoid the word resurrection (and also reincarnation) in reference to what happens to the Doctor in the teleportation chamber, preferring instead terms like “‘rebooting’” and even “‘rebirth,’” which she carefully surrounds with quibble marks (37, 40). She suggests at one point that Moffat may be referencing something more akin to samsara in this episode, given the cyclical nature of the temporal loop and the nearly ineluctable integrity of the Dial mechanism (33). Though the Time Lords’ machinations are unsuccessful, the character development that stems from endless “reboots” in this castle is profound—the Doctor is changed at last, Dennison argues, into someone who accepts both the persona of the Doctor and whatever parts of himself remain that cannot be absorbed into that persona (84). This acceptance is a spiritual rebirth or resurrection, of sorts, that enables the Doctor to move on from past grievances. Dennison’s commentary tacitly highlights the fact that the rematerialized Doctor is no self-sacrificing Christ figure associated with spiritual redemption; he is, nevertheless, fully equipped to save the tangible, physical universe in episodes to come.

Though the author does not focus directly on the medieval connotations that arise from the castle setting and its contextualization of confession and rebirth, Dennison’s work is nonetheless valuable to those investigating medieval echoes in Doctor Who. Any reading of the medieval motifs in this episode would be incomplete without a careful consideration of how those motifs interact with Jungian symbolism. Furthermore, Dennison’s analysis offers an astonishingly comprehensive portrait of a mind that, prior to reading Heaven Sent, I would have described as incomprehensible.

[1] This episode is written by Steven Moffat and directed by Rachel Talalay. At the time of publication, Heaven Sent ranks second in IMDb user ratings for all episodes in the rebooted series. It is second only to the episode Blink (2007).

[2] Those outside the Dial do not experience this length of time.

[3] This fictional substance is harder than diamonds.

[4] Dennison marks that this is capitalized in Moffat’s script (8). Whovians will recognize the ambiguity here—the Doctor’s final revelatory confession is enigmatic, as this pronoun could refer to the Doctor, to the immortal character Mayor Me/Ashildr, or to combinations of characters, such as the Doctor and Clara. We learn that the Hybrid is likely the Doctor and Clara in the next episode (Hell Bent), though later characters, such as Sacha Dhawan’s version of the Master, seem to fulfill at least parts of the Gallifreyan prophecy, as well.

[6] Those who study medievalism may also draw some tenuous connections between the clockwork space of the Confession Dial and Johannes de Sacrobosco’s idea of the machina mundi in his thirteenth-century astronomy textbook Tractatus de sphæra.

Posted by Mikeinexile at 6:15 PM