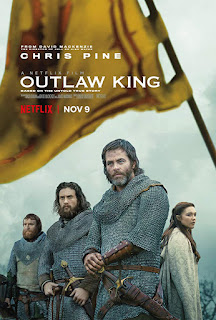 Beam Me Up, Robbie!: Outlaw King, directed by David Mackenzie

A Saturday Night Live skit last year poked fun at the confusion over the current profusion of young actors with the first name Chris.  There are Chris Evans (Captain America), Chris Hemsworth (Thor), Chris Pratt (the Jurassic dinosaur guy), and Chris Pine (the young James Tiberius Kirk from Star Trek). And it is Pine who has traded in his journey into the future to galaxies far, far away for a journey into the past to a medieval Scotland in seemingly endless conflict with England—though thanks to Brexit, that conflict continues, albeit decidedly less bloodily so than in the film, today. In Outlaw King, Pine plays the often-embattled Robert the Bruce (1274-1329) who reigned, at times uneasily, as King of the Scots from 1306 until his death.


Outlaw King, now running almost 30 minutes shorter than it did in its original festival release, must at least in passing deal with another famous Scottish thistle in the side of the English, William Wallace (1270-1305), whose life Mel Gibson brought, with considerable historical license, to the screen in the 1995 film Braveheart.  Wallace defeated an English army at the Battle of Stirling Bridge in September 1297, and was then briefly Governor of Scotland.  His defeat at the Battle of Fallkirk in July 1298 forced him to go into hiding until his capture in 1305.  Wallace, or at least his severed left arm, makes a brief appearance in Outlaw King.  His execution—vividly recreated by Gibson, who in Braveheart dies screaming “Freedom!”—was notably gruesome even by medieval standards.  He was first hanged, but cut down while he was still alive. He was then castrated and eviscerated, and had his bowels burned before him. Finally, he was drawn and quartered, and beheaded. His head was put on a pike atop London Bridge, and his severed limbs were then separately sent to be displayed throughout Scotland as a warning to any other would-be rebels of the wrath of England’s Edward I.  And, in Outlaw King, the public display of Wallace’s severed arm as a warning and threat leads to yet another Scottish rebellion, now under the initially reluctant leadership of Robert the Bruce. 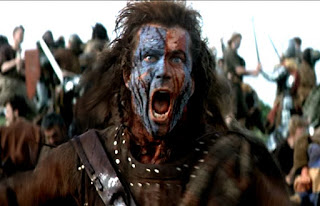 [Left: Mel Gibson as William Wallace in Braveheart]
Wallace’s cause was also Robert’s—the two were briefly allied.  In 1290, succession to the Scottish throne became a cause of continuing conflict, as there was no clear claimant to that throne after the death of King Alexander III and then that of his heir and granddaughter, Margaret, Maid of Norway, herself only a child.  With their country on the brink of civil war, the Scottish nobles and clans invited England’s Edward I to come north to settle the matter.  Edward’s solution was to declare himself ruler of Scotland, and the Scots soon rose in a series of rebellions against his increasingly tyrannical rule.  Outlaw King opens in 1302 with Robert the Bruce repledging fealty to Edward I (Stephen Dillane), and receiving in return royal forgiveness for his previous rebellious activities and the hand of the daughter of the Earl of Ulster, Elizabeth de Burgh (Florence Pugh), in a politically advantageous marriage—Robert’s first wife having died in childbirth. In addition, Edward, somewhat unconvincingly, promises to recognize the Bruce claim to the Scottish throne, though John Comyn (Callan Mulvey), long a rival to the Bruces, also advances his in many ways more legitimate familial claim to the same throne.

The death of Robert’s father (James Cosmo), who had fought with Edward on crusade in the Holy Land, leaves the younger Bruce with second thoughts about how much Edward is to be trusted.  Comyn agrees to meet Robert, but when he learns of the latter’s plans to mount a revolt against Edward, Comyn reasserts his allegiance to Edward and promises to betray Robert.  In a moment of pique, Robert kills Comyn, and after some ecclesiastical hair splitting about how sacrilegious the murder actually may be since it takes place in an abbey church, the bishops of Scotland rush Robert to Scone to be crowned King of the Scots. Edward soon enough defeats the Scots under Robert’s rule, and Robert takes to land and sea to escape the English, until 1307 when, thanks to his use of especially brutal guerilla tactics, Robert manages to defeat a much larger English army, now led by Edward II (Billy Howle), at Loudoun Hill. The film ends with that battle.

In 1314, at the more important Battle of Bannockburn, Robert would defeat an even larger English army led by Edward II, and thereby ensure Scottish independence, though peace between Scotland and England was not finally established until 1327 under Edward III.  Of course, Robert’s descendants would three centuries later ascend the English throne after the death of Queen Elizabeth I.  At times, history can be nothing short of ironic.

Directed by David Matthews, from an original screenplay which he co-wrote, Outlaw King is only the latest example of what I have called “the reel Middle Ages,” films that bring the medieval to life with varying degrees of historical accuracy, and with sometimes radically different cultural agendas.  Pine broods well, but doesn’t quite have the gravitas necessary to be an epic film hero, nor, in the film, to rally the fractious Scottish clans to his cause—he meets with indifference and betrayal as he crisscrosses Scotland in an attempt to raise an army.

Indeed, Robert’s wife outshines him initially when she stands up to the English who are about to conscript a mere boy into Edward’s army.  Robert had counseled patience, not boldness.  Dillane’s Edward I seems less threatening and villainous than Patrick McGoohan’s in Braveheart, though Howle’s Edward II is decidedly less effeminate and more dangerous than Peter Hanly’s in the Gibson film.  Indeed, Howle’s Edward II is totally mad, and clearly bent on outdoing his father’s cruelty.  When he marches north, he unleashes “the dragon,” thereby eschewing the laws of chivalry and giving his troops a free hand to adopt whatever military tactics they want.  Scottish women are shipped off to England to become servants and sexual playthings; men and boys are summarily executed wherever they are captured.

In Outlaw King, the English have long lost their patience with the Scots, and they adopt a take-no-prisoners, scorched-earth policy in dealing with the rebels.  That policy leads to scenes of at times gratuitous and gruesome violence—a Scottish lord is strung up and then has his belly slit open so that his entrails spill out in front of a horrified crowd.  His father protests, only to have his own throat cut.  Robert’s wife is suspended in a cage off of a cliff, and left exposed to the elements.  Robert’s own guerilla tactics lead to a final bloody conflict that spares neither man nor beast as the would-be King of the Scots uses the very land upon which he treads as his ally against the invaders.

[Left: Chris Pine as Robert the Bruce in Outlaw King]
Bogs and ditches dotted with sharpened wooden spikes quickly make mincemeat of the English cavalry and their horses. Before the final battle, we get the obligatory rally-the-troops speech—twice.  Edward II urges the English to fight to defend their borders from invading swarms of Scots—striking a note with decidedly global echoes today.  Robert is brief: he urges his men to fight for whatever they believe in—God, Scotland, clan, family, self—just as long as they fight.  Neither rises to the rhetorical heights that Gibson’s William Wallace did in Braveheart. In battle, Robert’s right hand man is James “Black” Douglas (Aaron Taylor-Johnson), who is Loudoun Hill’s version of a Viking berserker.  During the battle scenes, the scale of carnage is beyond the pale.  Robert has the opportunity to kill Edward II, but he allows him to crawl back to his troops to fight another day—though Edward II would soon enough be deposed by his own nobles.

The medieval historical epic has been a cinematic staple for more than a century.  The reasons are obvious—such films present larger than life characters whose stories are the stuff of legend.  But the golden age of the medieval historical epic has long past. In Outlaw King, except for two very brief scenes, a wedding and a funeral, in which the costume and wardrobe department seems to have decided to blow the budget, gone is the pageantry, the epic sweep, the panoramic long shot—think how Charlton Heston as the eponymous hero in Anthony Mann’s 1961 El Cid goes riding off into the sunset in the film’s final, awe-inspiring scene, and compare that scene and ride with the domesticity more than evident in Robert’s final rush on horseback to embrace his wife, who has been uncaged and returned to him as part of a prisoner exchange.  Robert is not here riding off into history and legend.  He is simply going home to his wife and daughter. Outlaw King goes for the close-up—the personal rather than the epic. Instead of pageantry, we get gore.  Instead of history, we get gritty costume piece.  The lulls in action are brief, and few, quickly giving way to more violence and gore. The camera wants us to see Robert’s scarred and bloody face, and Edward’s puking crawl through the mud as he feebly tries to reunite with troops who have abandoned him. 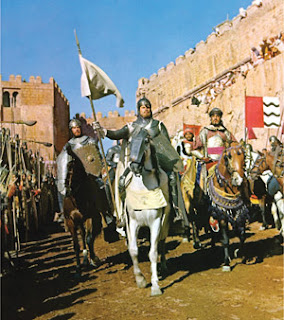 [Left: In Anthony Mann’s 1961 El Cid, though dead, Charlton Heston as the title character riding off at the film’s end into history and legend.]

Heston, of course, made a career out of playing epic screen roles and larger-than-life characters; he was Moses, Ben Hur, Sir Thomas More, Cardinal Richelieu, China Gordon, Marc Antony, and Michelangelo.  A blue-faced and wide-eyed righteous avenger, Gibson’s Wallace, was, for better or worse, also larger than life.  Pine’s Robert is much less so.  His Robert is a character for the small screen—the laptop or iPhone—not for the wide screen or CinemaScope.  As the young Kirk, Jack Ryan and Wonder Woman’s Steve Trevor, Pine has certainly shown that he can act, though he clearly cannot carry a film like Outlaw King, whose predominant mood is an almost universal world weariness.  The Scots are weary of the English invading, and the English are weary of the Scots rebelling—as Dillane’s King Edward I bellows: “I am so sick of Scotland!”  Elizabeth has more spunk that her husband—and she is no one’s fool, victim, blushing bride, or obedient daughter.  She stands up to her parents, to Edward II, and even to her husband, defiant and shedding nary a tear, though she too can’t carry the film.  Film rarely finds medieval women engrossing or of more than passing interest, and, in Outlaw King, Elizabeth’s husband receives similar (mis)treatment.