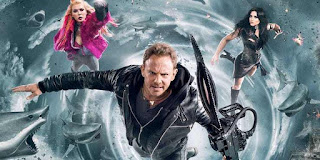 The Last Sharknado: It’s About Time


Medievally Speaking may not be the most obvious venue for a review of the sixth (and supposedly last) installment of the Syfy Channel’s Sharknado franchise, but this last Sharknado made-for-television film does include a wonderful segment set in Camelot.


Within the academy, we have of late been having any number of heady and heated discussions about the history, legacy, and current state of medievalism and Medieval Studies.  And such discussions are welcome and healthy, but we shouldn’t lose sight of the fact that the phenomenon we call medievalism is fueled by its continued ubiquity in popular culture.  Thus “the medieval” continues to pop up in commercials for beer, pizza, auto parts, cell phones, insurance, and financial planning, to name only a few products and services that have recently eagerly embraced some version of the Middle Ages in their advertising and marketing campaigns.


Film and television continue to present their own version of “the medieval”—admittedly with mixed results—but we have recently had appearances of elements from the Arthuriad in a number of cinematic genres where we might not expect them, such as a spy film, a Mad Max film, a transformers film, and a film based on a video game.  Television too has given us a fairly riveting series on the Vikings and on Alfred the Great, and not so riveting series set on the Welsh borderlands under Edward II, and another about the Templars and their search for the Holy Grail in fourteenth-century France.


All of which brings me to the Syfy channel’s 2018 made-for-television film The Last Sharknado: It’s About Time. The franchise began in 2013 with a made-for-television film, Sharknado, on the Syfy channel that, to everyone’s surprise, became an instant cult hit.  The original film and its sequels (all directed by Anthony C. Ferrante) combine multiple genres—comedy, disaster, gore-fest, science fiction—and are worthy successors to the B-movies that were made in the 1950s and 1960s.  The films are puerile, jejune, gross, badly acted, cheaply made, and improbably plotted.  Depending upon a viewer’s tolerance for low culture, the films are either hysterically funny, or just plain stupid.


A sharknado is nothing less than a gigantic cyclone that has sucked up hordes of man-eating sharks which are then dumped on land where they threaten to devour the entire population of a city.  Thanks to Steven Spielberg’s 1975 film Jaws (from a 1974 novel by Peter Benchley), sharks as monsters have become part of our cultural fabric—the Sharknado franchise just stretches that fabric as far as it can. The hero of the franchise is a bar-owner and surfer named, appropriately, Fin Shepard (Ian Ziering), who in the first film sets out to rescue his estranged wife, April (Tara Reid), and their teenage daughter before the sharknado that has hit Los Angeles reaches them. The sequels see Fin and April defending New York and Washington, DC, from subsequent sharknados, until a final sharknado in the fifth film, Sharknado 5: Global Swarming (2017), triggers the end of the world. Each sequel introduces additional characters, and features guest appearances from an eclectic group of actors and celebrities, all of whom seem to have come along for the ride for the laughs.


In the final installment of the franchise, Fin, with help from April, who may or may not be dead, and their son, Gil, travel back in time to undo all the previous sharknados to prevent the apocalypse that ended the previous film.  They begin in the age of dinosaurs in a segment that pays homage to Jurassic Park—the Sharknado franchise is filled with references and nods to any number of film and television series.  Just when things look bleak and hopeless, April arrives astride a pterodactyl, Fin undoes the first sharknado, and he and his companions fast forward to what they anticipate being the present, only to find themselves in Camelot.


That April astride the pterodactyl is a clone of Daenerys Targaryen astride her dragon from A Game of Thrones is no accident, and indeed the inhabitants of Camelot mistake the pterodactyl for a dragon.  And like one of the dragon in Thrones, April’s pterodactyl is shot down by a giant arrow.  In Camelot, Fin and company first encounter a bewildered peasant, whom Fin repeatedly calls “Frodo”—pace Professor Tolkien.  And Camelot is already under siege by the evil Morgana played by a snarling, over-the-top Alaska Thunderfuck from RuPaul’s Drag Race, though any student of cinema Arthuriana will recognize her as simply the latest in a long series of snarling, over-the-top Morgana-like figures.  Morgana’s nemesis is Merlin, here played in one of the film’s best in jokes by the popular physicist Neil deGrasse Tyson.  And thanks to Mark Twain, time travel and medievalism have long been connected to each other.


Morgana wants Excalibur and the throne of Camelot.  Merlin is intent upon preventing her, and upon helping Fin, whose son Gil was at one point Merlin’s tutor, return to the present.  Morgana’s plans are interrupted by the appearance of another sharknado, and an armor-clad Fin pulls Excalibur from the stone, though the sword’s blade turns into a chain saw, in a nod to Bruce Campbell’s Ash in another apocalyptic Arthurian movie, Army of Darkness. Fin defeats the sharknado using Excalibur and some catapults, and Morgana goes up in flames screaming “I’m melting,” just like the Wicked Witch from The Wizard of Oz.  Sharknado is certainly catholic in its nods and references to other films and forms of popular culture.  When Fin and company catapult out of Camelot, they land in George Washington’s embattled camp where they encounter a surly Alexander Hamilton (played by popular television economist Ben Stein), who is the butt of any number of jokes referencing the highly successful Broadway musical that bears his name. 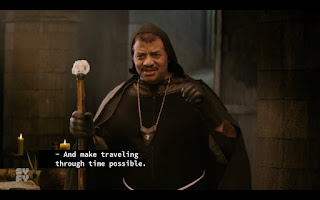 
In Travels in Hyperreality, Umberto Eco notes that we are always “messing up” the Middle Ages to meet a variety of agendas.  The Camelot segment in The Last Sharknado is a brilliant example of just that kind of “messing up.”  To a popular culture enthusiast, it is an authentic example of “the medieval.”  It has a castle, a dragon, a group of peasants, an evil Morgana, a wise Merlin, and a brave knight who wields a special, magical sword to save the day.  It even furthers its authenticity by referencing such other authentic examples of “the medieval” as A Game of Thrones and Lord of the Rings, with a nod to The Wizard of Oz thrown in for good measure.  And it casts as its Merlin and Morgana two “real” television celebrities, from admittedly opposite ends of the celebrity spectrum: the well-known physicist Neil deGrasse Tyson, who is a ubiquitous television and radio talking head on any number of scientific topics, and the truly outrageous Alaska Thunderfuck, from a reality competition television show that has, for ten seasons, turned the outrageous into Emmy award winning high camp.


The Last Sharknado: It’s About Time, directed by Anthony J. Ferrante, written by Thunder Levin and Scotty Mullen, The Asylum and Syfy Films; first broadcast on the Syfy Channel on August 19, 2018.