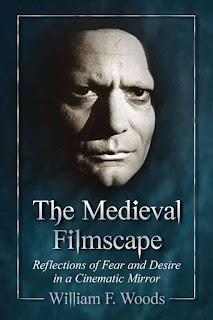 
Writing about “period” film as “period film” is rife with difficulty as William F. Woods admits in The Medieval Filmscape: Reflections of Fear and Desire in a Cinematic Mirror.  Beyond the question of period itself, all studies of genre or subgenre present the problem of “quality,” and the “medieval filmscape” does so more than most.  A responsible scholar must attend to a variety of texts which include, to use Rick Altman’s term, the “semantic” elements of that genre, including many films which are frankly terrible.  Simultaneously, most scholars who undertake subgenre study do so to argue for its critical function.  Woods manages this problem structurally and through one major metaphor (the mirror), which is his greatest strength.


Woods opens his introduction, “Our Lady of Pain: The Subgenre of Medieval Film,” by marking the breadth of the subgenre in terms which are both neutral and indicative of its variable quality.  “Blood-soaked epic, mystical sword and sorcery, legalistic monkish psychodrama—these are the medieval movies” (3).  Such a list brings to mind the subgenre’s possibilities: a committed film scholar can think of examples that run the gamut of grade and importance.  The remainder of the (quite comprehensive) introduction breezes through films like Christian Duguay’s Joan of Arc (1999), which was devastated by critics and a box-office bomb, but nonetheless typifies the subgenre.  Wood also acknowledges his own “guilty pleasures” and his enjoyment of a “gloriously bad movie,” which squares with his genial and reader-friendly style and lends credibility to his inclusive approach (26, 30).


Wood then uses Part I to address three significant issues in the study of the medieval filmscape before transitioning to case studies in Part II.  This has become a familiar sequence for genre study, but Wood’s list of “issues” (Authenticity, Simplicity, and Spectacle) is not precisely about what is contained or addressed in the filmic texts themselves.  This choice is to his credit.  Rather than adopting what Rick Altman famously called a “semantic” approach to the subgenre, Wood’s three categories address important questions about the very existence of the subgenre: why it continues to exist, why filmmakers and viewers return to it again and again, what is at stake in its recurrence [1]?  His simple argument is that the viewer is better able to understand her own life and struggles through seeing their representations in a medieval context.


The chapter on “Authenticity” is the most difficult undertaking.  Woods announces in the chapter’s first page that “despite their mythic overtones and romance coloring, medieval movies, like medieval histories, have to deliver a convincing picture of life” and he connects this to “cinematic realism” (23).  Theories of “cinematic realism” abound and scholars and viewers have been discussing the topic since the origin of cinema itself.  Historical adaptation study is a field almost entirely concerned with fidelity and authenticity.  Sarah Salih’s essay, “Cinematic authenticity-effects and medieval art: a paradox,” alone would have done some heavy lifting [2]. Major monographs and collections on these issues appear to this day, but Woods consults only two of them.  A deeper sense of the field would have been to his benefit.


Chapter 2 on “Simplicity” is short, solid, and convincing.  The “mirror” argument—that we see ourselves in the medieval context—falls easily in line.


“Spectacle,” Chapter 3, is the strongest because it is the most original.  Woods expands the category of spectacle such that it is not the joust or the battle which suffices.  He reads royalty and religious figures as spectacles in themselves.  Because Woods presents a unique idea, he might have taken it further, perhaps exploring how such a reading might offer deeper critiques of institutions and hierarchies in both medieval and modern societies.  If these films are indeed mirrors, they supply abundant opportunities to reflect on the superficial, corrupt, and unsavory elements of modern power structures.


Woods does, however, grapple a bit more with the potential for critique as he moves into Part II, his case studies.  Two of these chapters (three case studies) rise above the others for their ambition.  These first two chapters not only add nuance to Woods’s earlier themes, but regard films which are strange and aesthetically overwhelming.


Woods begins Chapter 4 by considering The Advocate (Megahey, 1993), a rich and sophisticated text.  As Woods puts it, “[i]n perhaps no medieval film are audiences so insistently invited to scrutinize, evaluate, and go beyond the information given” (62).  Without a thorough knowledge of the subgenre, I’m inclined to agree.  The film portrays Richard Courtois (Colin Firth), a wealthy French lawyer based on Bartholomew Chassenee and is cynical nearly to the point of nihilism.  Courtois is an animal advocate and the film is rife with images of animals which are beautiful, but just as often disturbing.  Woods addresses this visual landscape as a backdrop for a what he calls “protocols,” rituals which make the experience more “real” for the viewer as they seem so particular to the world of the film (68-9).  While some of the connections he makes (Thoreau, for example) seem like non sequiturs, I admire his willingness to confront such a complex film.


Chapter 5 in Part II may be even bolder, taking on canonical films by canonical filmmakers, The Seventh Seal (1957) by Ingmar Bergman and Carl Theodor Dreyer’s La Passion de Jeanne d’Arc (1928). Woods immediately dispatches with this, moving immediately from their reputations to their purpose in The Medieval Filmscape, writing that “they are less interesting as icons of high modernism than for the powerful ways that they exploit the conventions of medievalism. . . . in each case an unrelenting focus on a spiritual quest that has never seemed so nakedly and humanly genuine as it does in these two films” (76).  He offers a consistent summary and description of The Seventh Seal, especially contemplating the opening scene, arguing as he has that the medieval context allows the viewer to ponder the merging of the “mundane and the transcendent” in our own lives, as our character Jof has one.  Regarding La Passion de Jeanne d’Arc, Woods makes the point, familiar to film scholars, that Dreyer’s close-ups create an intense intimacy with Jeanne d’Arc (Maria Falconetti). Woods’s mirror metaphor is most apt and powerful in this example (86).


Chapters 6-8 consider texts which seem less interesting to this cinema-minded reader, though a medievalist is likely to see their importance more clearly (i.e. lesser works by important filmmakers like Eric Rohmer’s Perceval le gallois and Robert Bresson’s Lancelot du Lac, as well as films by less well-known directors, including Jean-Jacques Annaud’s adaptation of Umberto Eco’s The Name of the Rose [1986] and Daniel Vigue’s The Return of Martin Guerre [1982]).  For example, aesthetic quality aside, French Arthuriana more than merits a chapter.  I was interested again though by Chapter 9, in which Woods begins to apply his notion of the “mirror” to a more specific modern context, writing on Ridley Scott’s Kingdom of Heaven (2005).  Here, Woods even mentions the filmmaking context: “Scott issued copies of the early script to historians and others whose opinions might carry weight with the public, it became apparent that the crusades themselves, let alone the Iraq war, had not ended” (155). Woods argues then that Scott’s script requires a “privileging of eastern culture,” even as it indulges in what is “unashamedly a celebration of Orientalism” (166).  Though Woods himself does not make this argument particularly, this Orientalism—the film sets up Jerusalem as a place for Balian (Orlando Bloom) to “find himself”—may in fact “mirror” American notions of the Middle East at the time (166).  Woods argues later that “the measure of ethical authority in this film is ultimately the culture of the East,” but that the East allows a sort of wealth that Balian ultimately rejects, and it’s hard not to see Scott imploring Western divestment from the conflicts—and the oil—of the Middle East (174).  This more explicit politics of the “mirror” elevates the metaphor as Woods nears the end of his argument.


Oddly, in the Epilogue Woods seems reluctant to put his finger on that which is reflected in the mirror, even as he gestures toward “the self-made man,” “the striver,” “the Pony Express,” “freedom and equality,” and “two political parties,” among other things.  Is it a version of modern American-ness that he is arguing is reflected or reflecting?  I suppose I wish he’d told us.  The end of the book however justifies its premise: the “mirror” is not the tautological or trite metaphor it may seem, but a way of thinking through “period” and genre which has the potential for multifaceted uses.