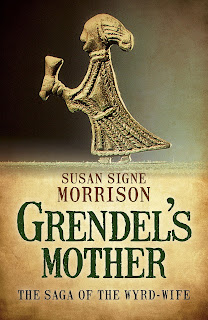 Susan Morrison’s familiarity with and love of Germanic literature can be found on every page of her novel about Grendel’s mother, the unnamed aglæcwif and ides introduced in the poem Beowulf.  In the Anglo-Saxon poem, Grendel’s mother enters Hrothgar’s hall to avenge her son and take back his arm. This is not to imply that the poem says nothing else about her: we know that she is in idese onlicnæs, in the shape of a woman, and we learn that she is a far superior fighter than her son when she poses a significant threat to Beowulf. In their fight, though Beowulf has a difficult time, he is able to decapitate her. That, short of Beowulf’s recapitulation of the events that took place in Denmark to Hygelac and his court is all that the Beowulf-poet relates of her. Like John Gardner’s novel, Grendel, that gave Grendel a voice and a story, Susan Signe Morrison gives a voice—as well as a name and history—to Grendel’s mother in this novel that tells the story, from beginning to end, of a female foundling from across the sea.

Called Brimhild by the couple that adopts her, Brimhild’s story unfolds against the backdrop of the Scylding court.  Juxtaposed with the court is the sea, with all that it promises, in terms of fish, travel, exploration, and raids.  These are a seafaring people. Brimhild herself goes to Hrothgar’s court when she is old enough; there she comes into contact with a new religion, though not for the first time, politics, class consciousness, and violence. Morrison’s novel shines in its depiction of Brimhild as idealistic, hopeful that violence—in the form of raiding specifically and cycles of violence generally—is not requisite for her society. In Beowulf, we see the women of the poem in the context of the masculine economy, trying to work within masculine expectations of feminine behavior.  The poem is nostalgic for a time when heroism was appreciated.  In Grendel’s Mother, we have a story where a woman is confronted with the truth of the hall: that without cycles of violence warriors become slothful, that a great hall like Heorot cannot even be built without gold and treasures obtained in battle or from a conquered people. The novel makes a reader think about the costs of heroism for everyone in a so-called heroic society.

Unfortunately, Morrison is too self-conscious, too aware of what she wants to accomplish; this historical novel, so-called adult fiction, is chock full with references to other Germanic literature: Norse poems such as “Þrymskviða,” (“The Lay of Thor”) “Völundarkviða” (“The Lay of Volund”), “Hávamál” (“Sayings of the High One”), Norse prose such as the Saga of the Volsungs and Þidrek’s saga; and Old English poetry such as “Widsið,” “The Wanderer,” “The Wife’s Lament” as well as others. One can commend Morrison for her desire to bring these other stories to her readers, but there are references without context with the result that the story is overwrought. Chapter 22, titled the Angel of Death, which itself is a reference to Ibn Fadlan’s report of a Viking funeral and a woman so called, opens with Brimhild, Grendel’s mother, and Freawaru, Grendel’s half-sister and lover, mourning Grendel. The narrator tells us “they suffered more than Gjaflaug, Herborg, and Gullrond, those widowed ladies each claiming she was most unhappy” (155). If the reader does not know who these women are, which the reader will not know unless she has read the poem “Gudrunarkviða in fyrsta” (The First Poem of Gudrun”], then the comparison of the level of grief, of the depth of sorrow, does not register.  It is only in the list of Proper Names, found at the end of the novel, that Morrison explains the reference and the significance of the comparison.

Furthermore, Morrison has chosen to incorporate alliteration, a requirement for Germanic poetry, into her prose. While it is possible that a little alliteration might have worked—after all, Ælfric has rhythmic prose sentences that have occasional alliteration—Morrison’s alliteration has no discernable pattern and is all too frequently over done.  Consider the following 17 word sentence: “Hale heath heroes will harass halls, gone will be golden gables, bone-rings will burst in the blaze.” Five words alliterate with h, 3 on g, and 3 on b, with 11 words out of 17 bearing alliteration; there are just too many words in this sentence that alliterate, forcing the reader to focus less on the story than on a stylistic choice. Alliteration has, moreover, made for some infelicitious word choices, resulting in incongrous or offputting imagery: “foe’s female” (74, ‘female’ used because it alliterates, but one would have expected a word such as ‘wife,’ or ‘mate,’ or ‘bride’, given the context); the phrase “embraced by Hrothgar’s fleshly fetters” (78, a reference to Hrothgar’s arms—‘fetters’ works here as he has embraced Brimhild to hold her still, but ‘fleshly’ resonates weirdly); and “a fighter lowed a lacivious laugh” (93, according to the dictionary only cattle low, raising the question of how the reader is to think of the fighter).

In addition to the problems with the alliteration, there are some odd turns of phrase: “had it off” (44); “wielding his metal friend” (141-2, a reference to a sword, but off-putting, off sounding to those who know Anglo-Saxon or Old Norse); “dragon fell” (155, a reference to dragon skin, but not explained) just to name a few. Morrison also incorporates basic kennings into her novel:  “gannet’s bath” (111), “whale’s back” (115), “victory-twig  (152, not explained in the glossary, but a reference to a sword), just to name a few.

A Note to the Reader, found at the end of the novel, explains Morrison’s reasons for writing the novel and provides some background about Beowulf. There are also Sources for Quotes, a Bibliography (for both the book and further reading), a Glossary, and a list of Proper Names. Unfortunately, there’s no table of contents that lets a reader know that these aids are there. I found all of these useful resources only when I had finished the book. I was also struck by the references to older translations for the eddas.  Morrison refers readers to Jean Young’s translation of Snorri’s Edda, i.e., the Prose Edda, when Anthony Faulkes’ translation is newer, complete, and much better than Young’s; she cites Lee Hollander’s 1964 translation of the Poetic Edda, when Carolyne Larrington’s more recent translation is more readable and, in my mind, far better.

I tried to read this novel simply as a novel, but I had real difficulties moving past what I have noted above.  In addition, I found archaic word choices and the occasionally didactic tone problematic, even out of place. Certain things were predictable (such as who Brimhild’s father was) and others unexpected (but possibily uncalled for—such as the doubled incest story).  What I found most insightful and thought provoking about this novel, Grendel’s Mother: The Saga of the Wyrd Wife, was that it asked me to rethink Anglo-Saxon culture as a whole, particularly in terms of violence and its repercussions.