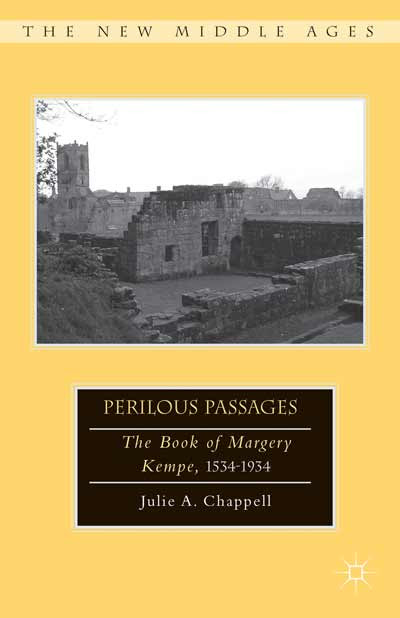 The one required course in my graduate program was Introduction to Graduate Research, designed to inspire and intimidate. The texts were the MLA Stylesheet, A Chicago Manual of Style, a pamphlet on the graduate research paper, and The Scholar Adventurers: enduring account of literature’s most famous research puzzles by Richard D. Altick.[1] We were to read Altick before the first class. A brilliant strategy: with chapter headings such as "The Secret of the Ebony Cabinet" and "Exit a Lady, Enter Another," Altick presented literary research as detective work.

Julie Chappell’s Perilous Passages: The Book of Margery Kempe, 1534-1934, brought back that sense of adventure for me, and it is no accident: as Altick echoed detective novels in his chapter titles, Chappell references the game of Clue (Cluedo) in her prologue: "Was it the Colonel in the Library with the candlestick? Or the Colonel in the ping pong cupboard with a box of matches? Like any good English mystery, this one began with a body purportedly found in the library of an English manor house belonging to a member of a gentry family of some antiquity" (xliii). The contradicting versions of the early twentieth-century discovery of a manuscript of The Book are fairly accurately described in those Clue-like questions. She carries this atmosphere of mystery and surprise through the book. I came away with a sense of wonder that such a manuscript, an affective account of a woman’s spiritual journey, survived the violent destruction of all that was deemed “popish” in the centuries after the manuscript’s completion. How it did is quite a story.

As Chappell explains in her "Proym," she did not start out to trace the journey of the manuscript. She was frustrated by the editors’ choices of extracts from Margery’s Book in The Norton Anthology of English Literature (1986 edition). Taken out of context, the excerpts "created a most extraordinary late medieval woman…for whom [the students in her survey class] could largely feel neither empathy nor sympathy" (xx). Wanting to provide such context, she reread the book in Middle English as well as reviewing current research on women’s spirituality in the late Middle Ages. Chappell’s proym chronicling her journey into Margery’s Book and its context is itself a brief, clear review of the literature. She came to see Margery and other pious laywomen as seeking "an authority with which to sanction their spiritual (and, by association, their earthly) lives [which] led [them]… to erase themselves through visionary experience, to become human palimpsests, spiritual beings written over the erasure of the earthly ones. Their authority, their voice would be understood to come from the highest auctor, God" (xxii). This was particularly important as Archbishop Arundel’s 1409 Constitutions made clear his abhorrence of women offering spiritual advice of any kind as it warned that vernacular versions of the Bible might permit "any old woman to usurp the office of teacher” and “dare to instruct men" (xxix).

But  her study took an unexpected turn when "a scribal ‘correction,’ the crossing out of ‘Pope’; in [a] litany of souls for which Kempe begged mercy" led Chappell to the British Library to see the manuscript of the book. "The manuscript of The Book of Margery Kempe was glossed and edited by rubricating hands from first leaf to last. Margery Kempe’s as yet unnamed sixteenth-century rubricators/editors made additions, deletions, glosses, symbolic drawings, and other enhancements…" (10). Chappell’s curiosity about the rubricators shifted her focus from Kempe’s life to the story of the manuscript itself. Beyond the two bookplates in the manuscript identifying the owner as Henry Bowden, born in 1754, and an earlier inscription on the verso side of the binding leaf facing fol. 1r identifying it as in the possession of the Carthusians of Mount Grace Priory in Yorkshire, we knew nothing of the whereabouts of this manuscript until Butler-Bowden brought it to the Victoria and Albert Museum in 1934.

Chappell finds that two separate individuals altered the manuscript—one working in the late fifteenth century, the other, the one who made "the last hurried marginal glosses and corrections," including the striking of the word "Pope," working slightly later, during the upheaval of Henry VIII’s religious reform. Comparing the hands with other manuscripts, Chappell identifies the two Carthusian scribes, and proposes the path by which the manuscript came to reside at Mount Grace. The later rubricator added a note to one of his marginal additions citing Richard Methley, a Carthusian mystic, as his source, a former vicar of Mount Grace whose work was similar to the books Margery Kempe claims to have "heard." His being referred to in the past tense provided Chappell with a date after Methley’s death for the first sixteenth-century rubricator of The Book (23).

To have come to reside at Mount Grace was key to the survival of Margery’s Book, as the Carthusian order held the copying and sharing of spiritual books in high regard, and Methley in particular translated into Middle English Marguerite Porete’s Mirror of Simple Souls, similar in its affective piety to Margery’s work.
Mount Grace itself was one of the last religious houses to be dissolved by Henry VIII, on December 19, 1539 (xxxviii). Discovering that Margery’s Book is not among the manuscripts listed as in the possession of Mount Grace at the time of its dissolution, Chappell searches for and finds a likely avenue of transmission, one that would bring the manuscript to the London Charterhouse. She includes a gut-wrenching account of the fate of the prominent members of the London Carthusian community, to emphasize in what reverence a member of the order, Everard Digby, held Margery’s Book, that he risked the fate of his less fortunate fellows to spirit the manuscript to the safety of a Popish recusant family.

In the chapter "Digbys, Erdeswicks, Bowdons, and Butler-Bowdons," Chappell outlines the genealogical path by which the manuscript was passed down through the centuries by Catholic recusants, documenting the marriages that led from Everard Digby in 1538, to the late eighteenth century Henry Bowden who pasted his bookplates in the manuscript, to Col. William Butler-Bowdon who discovered it tucked into a ping pong cabinet beside a fireplace in 1934.

From there the manuscript moved to the Victoria and Albert Museum, where it was placed into  the competent hands of the scholar Hope Emily Allen, who had the background to recognize what it was, "an incomparable record of ‘medieval pilgrim-routes [and] medieval social history [which] brings to life not only famous persons of the early fifteenth century, but also humble ones, at home and abroad’" (69). What I expected to be a triumphant end to the tale becomes the most ignoble part of The Book’s passage, a too-familiar battle in which an inexperienced but ambitious younger scholar (Sanford Brown Meech) chafes at the slow deliberation of his more experienced co-editor (Allen) and plays himself up to the Colonel, who is eager to gain credit for his family’s heroic preservation of such a find and easily joins in Meech’s impatience with Allen. In the end, Allen is pushed to the sidelines. It is an infuriating episode, but what good detective story has a happily ever after ending?

Dr. Julie Chappell, Professor of English at Tarleton State University, has published scholarly texts, creative non-fiction, and poetry, and it is her ease in all three styles that makes Perilous Passages a pleasure to read. While thoroughly documenting each step of her research, she pays attention to pace and pauses for emphasis, summing up the pertinent details, inserting anecdotes about the more colorful characters whose lives were touched, sometimes unknowingly, by Margery Kempe’s Book.

That a manuscript of The Book of Margery Kempe survived now seems just short of a miracle to me. I wonder what other marvels of medieval piety we have lost, or what gems still lie hidden behind paneling or tucked beneath the false bottom of a cupboard in some ancient pile, waiting to be discovered.

Candace Robb
Independent scholar; author of the Owen Archer Mystery novels and, writing as Emma Campion, The King's Mistress and the forthcoming A Triple Knot.