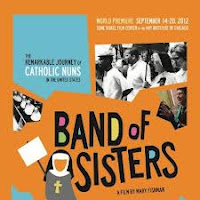 This documentary presents a particular challenge for students of medievalism since it focuses on women religious in the United States, specifically those who, at first sight, seem to have put the biggest distance between themselves and what we take to be the medieval origins of contemporary Catholic faith. Moreover, the invocation of HBO’s award winning Band of Brothers miniseries in the film’s title would also indicate a certain degree of concerted (“banding”) resistance to traditional practice and hierarchy, perhaps similar to the title of Jo Ann Kay McNamara’s 1996 monograph, Sisters in Arms, a 751-page tour de force following Catholic Nuns through Two Millennia.

Band of Sisters evokes and meets these expectations, albeit in a narrative that displays mostly calm, subdued, and serene tones and scenes, even when some of the protagonists demonstrate for the right of prisoners to religious support at the Broadview Staging Center in Illinois, where illegal immigrants await deportation, or when others participate in the annual march protesting against the “School of the Americas,” a United States Department of Defense Institute often held responsible for providing military education and support to South American dictatorships. However, the measured images and voices of the sisters involved in these political activities are shown as perfectly congruent: with those hailing from the community garden-cum-learning-center at Santuario Sisterfarm (Boerne, TX) or Genesis Farm (Caldwell, NJ), institutions following the late eco-theologian Thomas Berry’s call for the protection of an environment that represents the beauty of divine creation; with sisters’ involvement in CORE/El Centro in Milwaukee (WI), which offers natural healing therapy for mind and spirit as well as conventional medical support to the inhabitants of a low income community; and with other sisters in charge of Mercy Housing, one of the nation’s largest non-profit affordable housing programs. Each of these activities is accompanied not only by sisters explaining their individual vocations, but also by flashbacks and archival material that illustrate when, how, and why these sisters embarked on their paths. What evolves from these diverse voices is one and the same foundation for their activities: the Second Vatican Council’s encouragement to modernize the Catholic Church.

Producer/Director Mary Fishman shows how U.S. women religious, perhaps more than most other Catholic groups, followed the spirit and letter of Vatican II, gradually changing their appearance (from modifications to the typical habit to abandoning it altogether), heeding the Council’s call to renewal and universal holiness, and involving themselves with systemic change inside and outside the convent. Coevally with race riots, feminism, anti-Vietnam demonstrations, and the Chicano movement, U.S. women religious charted their own route toward a ministry for the voiceless people in society, organized in expressly non-hierarchical groups (most notably the Leadership Conference of Women Religious), and built connections with non-Catholic groups advocating for social justice and peace. One might assume that these kinds of activities would have removed the sisters further and further from the “quiet nun” William Wordsworth eternalized in his romantic (and medievalizing) description of a “Beauteous Evening, Calm and Free,” and even more from the allegedly similarly quiet nuns inhabiting medieval convents. However, encouraged by their own superiors’ advice to seek renewal and reform in the biographies of their orders’ founders and other foremothers, medieval and postmedieval, U.S. women religious would often have discovered similar areas of activity/activism, be it Hildegard von Bingen (1089-1179), who is often invoked as an example of green/holistic spirituality, or Sr. Ignatia Gavin, who co-founded Alcoholics Anonymous as recently as in 1935.

Band of Sisters does not delve into any medievalist connections, but it diagnoses the shock most U.S. women religious felt when they learned, in February 2009, that the Vatican had decided on performing an apostolic visitation on their practices, a top-down act clearly meant to put an end to what current Catholic leadership in the U.S. and in Rome see as a deviation from their own infallible interpretation of religious life. Nancy Sylvester, a Sister from the Servants of the Immaculate Heart of Mary, describes her reaction to the hierarchy’s intervention at a decisive moment in the documentary: “I did exactly what the church asked me – and now, the church is looking at me like, where have you come from … who are you?” I cannot say with any degree of certainty that her and other sisters’ astonishment was related in part to the fact that the investigation was carried out by the Vatican’s Congregation for the Doctrine of Faith, the successor office of what was centralized, since 1542, as the Supreme Sacred Congregation of the Roman and Universal Inquisition and wields, now as then, final and definitive authority on Catholic doctrine. What many of the sisters certainly objected to was the secrecy of the “doctrinal assessment,” by which the nuns felt scandalized and silenced. Mary Fishman deftly confronts the Vatican’s call to full obedience with some of the most ambitious anti-hierarchical projects several of the sisters are currently involved in, for example the Center for Earth Jurisprudence at Barry University’s Dwayne O. Andreas School of Law (Orlando, Florida). The premise of the center is to abandon the stewardship model promoted by the traditional church’s “hierarchy of creation,” and replace it with a partnership model that sees God’s earth as a sacred community in which humanity is an integral member of the earth community. It is easy to see how this transformational model, which joins forces with secular movements to promote an ecologically sustainable, socially just, and spiritually meaningful world would conflict with an originalist Roman Church whose male clergy are not inclined to relinquish control over the 'one true meaning' of the Christian gospel. Add to these areas of conflict the demands of U.S. women religious to allow women’s ordination (publicly brought to the fore by Sister M. Theresa Kane during Pope John Paul II’s visit to the U.S. in 1979), some sisters’ acceptance of homosexuality, same sex marriage, abortion, artificial insemination, in vitro fertilization, divorce, and birth control, and there is a recipe for a perfect storm. The latter topics are excluded from the documentary, and those interested in them might consult Kenneth Briggs’ more comprehensive (and more overtly partisan) Double Crossed: Uncovering the Catholic Church’s Betrayal of American Nuns (2006).

Medievalist viewers of Band of Sisters will quickly think of numerous historical examples of conflict between nuns and their chaplains and bishops, and even a now dated classic like Eileen Power’s 1922 Medieval English Nunneries reveals that nuns and their female leaders were, in their overseers’ eyes, often considered “quarrelsome and sharp of tongue, not knowing how to make corrections” (p. 645). However, many of the points at issue in the Middle Ages can be explained by the low level of religious and general instruction the nuns received. As Band of Sisters demonstrates, the vast majority of today’s women religious in the U.S. have advanced degrees, have studied and taught at colleges and universities, and are their male overseers’ equals when it comes to an informed understanding of scripture and questions of faith. To them, some of the accusations brought up by the Congregation for the Doctrine of Faith against their principal organization, the Leadership Conference of Women Religious, must sound just like the ones leveled against medieval sisters who did not follow their superiors’ omnipresent rules for what to do during every hour of the day and night. To expect similar kinds of behavior in the daily practices of 21st century sisters, who were asked by the Vatican fifty years ago to seek out new organizational forms and to live exemplary Christian lives in the midst of their respective societies, is understandably anathema to many of them.

All in all, I found Mary Fishman’s film carefully constructed, showing an even hand at presenting issues despite unabashed sympathy for the sisters' history, views, and achievements. At many moments, she communicates to viewers that this formidable experiment in post-Vatican II spirituality is coming to its (inevitable?) end. The average age of the sisters with speaking roles in Band of Sisters is at least 65, and while they all exude a vigorous sense of purpose and vocation, they too clearly see the finality of their efforts. Fishman has produced an informative and engaging documentary to allow viewers an admission ticket to this very specific slice in the 2000-year long history of Catholic sisters, and those of us interested in medievalism will find in it numerous elements for comparative investigation.