Hazell, The Plants of Middle-Earth 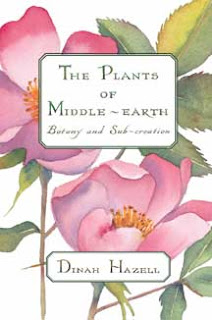 
Reviewed by Ilse A. Schweitzer

In recent years, literary scholars and students have witnessed a growing interest in the role of ecology in texts, authors’ portrayals of the natural world, and even the colonization of nature in literature.  Dinah Hazell applies this “green lens” to the works of J.R.R. Tolkien, analyzing his methods of creating a literary world, and its less-often studied inhabitants—plants.  Her strategy is two-pronged:  Hazell undertakes an exploration of the botanical influences on Tolkien’s writings, but also his practice of “sub-creation,” the idea of creating a believable fictional world.  Tolkien’s mythical world promises to be fertile ground for an exploration of the “lives of plants,” and Hazell teases meaning out of the linguistic, literary, and historical contexts of Tolkien’s plant-life.  She draws connections between the natural world of Middle-earth and the landscapes of Anglo-Saxon, Middle English, Renaissance, and later English texts, a type of analysis particularly suited to Tolkien’s works, as Tolkien was a medievalist and linguist himself.


In her brief introduction, Hazell alludes to Tolkien’s theories of sub-creation; as nature and history must serve as the foundation on which an author builds his or her worlds of “faerie” or fantasy, we should expect that Tolkien would use “elements from his own English and created worlds to achieve a rich mixture of experience and meaning” (2).  Thus, Hazell’s process of guiding her readers through the environments of Tolkien’s England to find the roots of his Middle-earth and its cultures makes sense.  However, given the size and depth of Tolkien’s history and mythology of Middle-earth (spread out over The Lord of the Rings trilogy, and “prequels” The Hobbit and The Silmarillion), and Hazell’s attention to Tolkien’s other short texts, such a project merits encyclopedic length instead of this slim volume.  Moreover, while Hazell’s choice to present a “botanical tour” through Middle-earth, with pauses for specific flora or regions, provides the reader with a pleasant reminiscence of the sites and events of Tolkien’s epic, this structure prevents her from providing detailed analysis of Tolkien’s fictive environments and method of sub-creation.


The botanical tour begins (as does Tolkien’s trilogy) in the Shire, with the first chapter devoted to “Hobbit Names.”  Hazell reasonably suggests that Tolkien’s “botanical names are steeped in associations and lore,” and transfer these meanings to the characters who bear them.  As she paraphrases Tolkien’s own explanation of the origins of the term “hobbit,” from Anglo-Saxon roots through Middle English texts, she also notes the medieval literary roots of names of many of Tolkien’s non-human characters.  The majority of the chapter, though, is devoted to the names of Hobbit women, which tend to derive from the nomenclature of flowers.  Hazell explores the significances of floral names with special reference to the plants’ roles and symbolic values in English history, and appearances in a variety of literatures (including Middle English poetry and Renaissance drama).  She draws on Culpeper’s Complete Herbal and English Physician to provide background on these plants’ provenances and botanical and folkloric uses.  Ideally, this layering of the various uses and meanings of floral terminology should be a fertile foundation for an analysis of the connections of the hobbit women’s names to their characters and experiences.  Unfortunately, the hobbit women do not feature prominently in Tolkien’s works in general, and typically (with the exception of Rosie Cotton), appear only in the context of family histories.  Hazell’s closing assertion that “plants can have both good and bad natures, sometimes mixed, and fulfilling the promise of floral symbolism often requires effort and choice by the namesake” (24) draws attention to the flaw in her first chapter:  how can readers evaluate the extent to which characters “fulfill the promise” of their names if these characters appear rarely in Tolkien’s narrative?  Hazell acknowledges Tolkien’s sparse and archetypal portrayals of women in a digression toward the close of the chapter; in fact, digressions of this sort occur often in The Plants of Middle-Earth, at times illuminating, at times an encumbrance to Hazell’s argument.


In her second chapter, “From Shire to Mordor:  A Botanical Tour of Middle-earth,” Hazell delivers a cursory tour through the geography and narrative of Tolkien’s trilogy.  Although this provides a helpful orientation for readers not so familiar with Middle-earth, Hazell’s method of moving through narrative space as she moves eastward from the Shire forces her to jump forward and backward along the timeline of the Ages of Middle-earth.  This jumbled summary of narrative is broken by several tangents; for example, Hazell interrupts her description of Rohan with a discussion of Tolkien’s use of diverse dialects among the peoples Middle-earth.  Even though the topic of language was beloved by Tolkien and not irrelevant for an analysis of his work, this particular digression slows the pace of the botanical tour and directs attention to Hazell’s pattern of inserting patches of analysis that are valuable but unrelated to the foci of her chapters.  Overall, Hazell provides a trek across a world far too rich and complex for the short chapter it receives here.
Chapters three and four allow Hazell opportunity to focus her analysis on smaller, more manageable natural spaces.  In the third chapter, she describes the specific plant-life of Ithilien, which provides sustenance to Frodo and Sam as they approach Mordor, and literary depth to Tolkien’s world.  Unfortunately, here and throughout her volume, Hazell prefers to summarize Tolkien’s descriptions of settings rather than provide textual evidence (in the form of excerpted quotations).  Given Tolkien’s love for and inventiveness with languages and neologisms, this choice will likely be disappointing both to literary scholars and fans of Middle-earth.  This criticism aside, Hazell produces compelling linguistic, literary, and historical lineages for Tolkien’s plants.  For example, the herbs culled by Sam (including thyme, marjoram, and sage) are described in terms of the origins of their names, and their uses in ancient and medieval society.  Later, in a moment of biographical criticism, Hazell suggests that the appearance of the anemone in Ithilien recalls the brilliantly colored anemone blossoms that Tolkien saw at Merton College, and, in his collected letters, likened the site to a Pre-Raphaelite portrait (57).  Tolkien’s letters are one of many sources mined by Hazell to trace his floral inspiration; in chapter three, she draws connections between the plants of Gondor and plant-life in poetry ranging from Homeric epic, the Middle English “Pearl,” to Tolkien’s own “Lay of Luthien,” and the sixteenth- and seventeenth-century herbals of Nicholas Culpeper and John Gerard.


Chapter four is dedicated to the forests and trees of Tolkien’s texts.  Hazell begins by observing similarities between the creative processes of Tolkien’s fictional artist, Niggle, of the short story “Leaf by Niggle,” and Tolkien himself.  In Niggle’s portrait of an ideal tree, Hazell sees “imagery of perpetually unfolding space and the independent, seemingly autonomous life of the creative process,” infinite artistic possibilities that parallel the infinite “leaves” of “untold stories” on “Tolkien’s literary tree” (66).  As she moves to more specific analyses of woodlands and trees in Middle-earth (including Mirkwood, Fangorn Forest, Lothlórien, the Old Forest and Old Man Willow), Hazell reminds the reader that Tolkien’s trees are empowered with both positive and negative potential, depending on the abuse or nurture they experience at the hands of humans and non-human beings.  Hazell is at her best here, as in the previous chapter, when she directs her focus on the literary and botanical histories of specific plants; for example, her elucidations of the nomenclatures, pharmaceutical uses, folkloric and symbolic values, and literary mentions (in Chaucer’s House of Fame, Shakespeare’s Hamlet, and Tolkien’s own personal memoirs) of the willow tree are fascinating, even though Hazell concludes that this “does not explain Tolkien’s choice of the tree for such a vicious character [Old Man Willow]” (75).  Further, Hazell’s choice to structure this chapter by beginning with a discussion of woodlands and ending with a discussion of modern technology evokes Tolkien’s polarization of the natural and industrial worlds in his trilogy, as well as his implied observation that both forests and factories pose dangers and benefits to human society.


In her brief final chapter, Hazell assesses themes of “restoration and recovery” in Middle-earth.  In a lovely moment, she compares Tolkien’s own artistic renderings of Minas Tirith to a walled medieval town, noting its inclusion of a medieval garden in the form of the Houses of Healing, an area symbolic of the post-war recovery undergone by Tolkien’s protagonists.  She summarizes the destruction wrought by the Enemy in the geography and societies throughout Middle-earth, reaching back into the pre-history of The Silmarillion to observe that, as the sacred Trees of the elves were restored over generations and moved with them as the elves settled into new realms, so too we witness the beginnings of recovery in the return of a king to Gondor, the cleansing of the Shire, and the promises of humankind in Tolkien’s “Fourth Age.”


Of Hazell’s two appendices, “Appendix A” provides a wealth of information and resources for readers interested in plant lore.  This section features a more academic tone than in previous chapters; Hazell gives a useful, short history of herbals and plant folklore in Britain, from ancient texts originating in the classical world to modern English lore.  The second appendix—a list of real and fictive plants in Middle-earth—is a thoughtful addition, but like the remainder of Hazell’s book, lacks textual citations.  Scholarly readers, especially those interested in Tolkien’s portrayal of the natural world, may wish that Hazell had provided citations for volumes and page numbers where each plant is mentioned in Tolkien’s texts, or even a short description of each plant.  Hazell’s bibliography is not extensive, and shows an even distribution between medieval (and later) English texts, herbals and histories of plants and gardens, Tolkien’s own texts, and previous scholarly works on Tolkien.  Recreating the visual effect of an historical herbal, the book contains watercolor illustrations of flora by contemporary artists.  However, in several chapters Hazell refers to Tolkien’s own watercolors and sketches of trees and gardens; if Tolkien’s own artwork were available for reproduction, his illustrations might make better additions to Hazell’s book than even these artists’ fine work.
In her preface, Hazell states that her intention in writing this book is “to create an environment that will enhance the reader’s perspective during future journeys along the roads and through the forests of Middle-earth, and to provide a place for reviving the memory of those trips” (x).  Casual readers of Tolkien will find much to interest them here; Hazell certainly succeeds in evoking memories of Middle-earth, and establishes connections between Tolkien’s real and imagined environments that contribute to our contemporary understanding of the famous author.  However, readers with a scholarly interest in botany, Tolkien, and his methods of sub-creation will likely find other texts offering more complex and well-researched commentary than Hazell’s exploration.


Ilse A. Schweitzer
Western Michigan University
Posted by ricutz at 8:45 AM