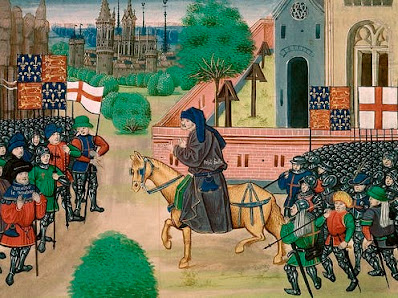 It is understandable to observe current political events and be tempted to draw comparisons to what superficially may look like historical precedent. Yet to take such a path is fraught with problems. In a recent contribution by Alfred Thomas it is argued that two rebel crowds, those of the English Peasants’ Revolt of 1381 and the pro-Trump supporters with their far right agenda – albeit separated by over 700 years – have quite a lot in common, and might even appear similar, especially if we consider that both uprisings occurred at times of pandemics. Yet they do not.

On the one hand I am pleased that the peasantry – or may I say the rebels – of 1381 are being drawn on for analogy and inspiration to explore and explain the events we recently observed on our television screens when a Trump-supporting mob entered Capitol Hill and thereby directly attacked the core of liberal democracy in the USA.  The shock of these events reverberated across the globe – I was watching events unfold sitting in our living room in Germany, at the same time as friends were following events in other parts of Europe and the Americas – and I dare say it will be one of those key events in history people will see in future as a hook for other memories. It was at the time when – at least in Germany – we were in our second lockdown in the second wave of the SARS Covid 19 pandemic. But I digress. It makes me happy that the rebels of 1381 are discussed again because I happen to like them as much as I despise the hate-filled speeches and sentiments emanating from the pro-Trump crowd.

To start with, it is a common mistake to see the 1381 revolt as an event centred around London. I blame British historians for this entirely as the London-centric view of political, cultural and economic events so common to Britain has often not sufficiently been tempered by the research scope of historians of the fourteenth century. Indeed, one overriding factor which has always fascinated me about the rebellion is just how widespread it was. Unrest was not just occurring near and around London, but in other large sections of England. The whole of East Anglia, for example was in revolt. Here, historians have reconstructed and painstakingly tracked rebel movements across villages and towns, who were often very probably in contact with rebels from further south and west through mounted messengers who carried word and news quickly through the countryside and into towns, promoting and maintaining the revolt as it spread to the centre of England, where unrest was felt in Reading, Worcester and other places and as far to the southwest as Berkshire and Somerset.[1]  Yet in their localised actions they remained autonomous rebel bands of men and women who left us, in the local indictment records, many very precious clues as to their aims and aspirations. Theirs was a communal uprising peaking around Corpus Christi day, when villagers traditionally danced around bonfires and followed processions through the centres of towns and villages with their local priests.[2]

This matters of course. It was a widespread movement of angry people on the move who were tackling their own local sources of government corruption and exploitation, their target was therefore not the seat of Government nationally, but very locally.  Thomas argues that the rebels were not ‘a homogeneous group of ignorant peasants’. True, I completely agree that the rebels were neither a homogeneous group nor ignorant, yet peasants they were for the most part. Peasants could be well off or dirt poor, they could hold a lot of land or little from their local lord, some were free, some were unfree (customary villein peasant tenants) and some were both; that is, they held some land freely and some in serfdom. There was therefore little that can be called homogeneity at home in rural communities. Village officials, reeves, haywards, even in some cases bailiffs also came from peasant families and high-ranking village officials like reeves were usually drawn only from unfree villein families.  These were therefore not people separate from peasant society as Thomas suggests, but rather an integral part of it.

These were not ignorant people, some could even read and write, and they were very well versed in law, common law and local manorial law. They enforced law and order locally and had the duty to speak in the manorial court. Yet they were peasants indeed. That is, they made the majority or all of their living through agriculture. I therefore do not think that calling the Peasants’ Revolt a ‘peasants’ revolt’ is a misnomer. Even when townspeople participated in larger numbers – such as in London – it is worth remembering that towns had higher death than birth rates. This means that the existence of towns was only possible because of immigration, mainly from villages. In other words, most townspeople would still have had very strong rural roots and came from peasant stock.

The men and women of 1381 had many good reasons to be dissatisfied. The Black Death – we are back at the pandemic – had ravaged villages with a terrifying death rate, which reached over 60% to 70% or more in some places, leaving survivors traumatised yet also in a very powerful bargaining position to better their lives. Yet instead of being able to benefit from rising wages and cheaper land they encountered lords who attempted to turn back the clock, put the brakes on economic change and impose a second serfdom. These rebels were not just thinking of themselves. They thought of their children and children’s children, they rebelled for the futures of their offspring. Their violence against property, which Thomas draws attention to, was moreover very deliberately targeted. They burned legal records which contained proof of their serfdom, they pulled down manor houses and requisitioned livestock to sustain their endeavours. They did not do these things because they wanted to steal and loot, rather their message was political. When the rebels sacked the Savoy in London they did not carry off John of Gaunt’s treasure but ceremoniously threw it in the Thames or on a bonfire. They wanted to destroy lordship and the records of their serfdom. They were not against law, they wanted a just law. They did not want to steal but stop exploitation.

It is true that some Flemings are reported to have been killed, in London as well as in King’s Lynn in Norfolk. There is much uncertainly around why these people were targeted and I have never found any evidence which helps to explain the actions of the rebels who killed them. Without such evidence we might make educated guesses or speculate, but as a historian this seems dissatisfying, as without a single solid piece of evidence, reasons might range as widely as personal vendetta or feud to, indeed, a hatred of foreigners. Yet even here we must tread with caution. Any historian of English villagers will have come across many villagers who are noted in the local manorial records as ‘the foreigner’, or ‘the Frenchman’ or, especially in the Midlands of England which regularly saw an influx of Welsh migrants during harvest seasons, ‘The Welshman’. They might be people who were identified as originating outside the village through such explanatory suffixes, but I have never in such cases seen any tangible evidence indicating that these people, if they decided to settle, were not accepted once they took on local land. In the village it was land that accorded status, not where one originated from.

Anti-Semitism is another problematic area. Accusations of Jews poisoning wells were far from uncommon in continental Europe but not in England, very probably because Jewish communities had been expelled previously. Yet to assume that that had Jewish people lived in London the rebels of 1381 would have killed them is an ahistorical as well as an illogical reading of the Revolt, which had nothing at all to do with fear of the Black Death, as had the persecution of Jews in Europe. We have furthermore no evidence at all of what the rebels of 1381 thought about Jews.

Instead, we know that they hated inequality: ‘When Adam delved and Eve span, who was then the gentylman?’, John Ball is famed for proclaiming in 1381: a radical brand of Christianity which calls for equality and even suggests that no man is lord over his wife, something which would sit very uneasily indeed with most Trump supporters on Capitol Hill. Neither could I imagine any of Ball’s other proclamations attributed to him by contemporary and hostile commentators to fit into the pro-Trump Proud Boys camp: ‘How can they claim or prove that they are lords more than us, except by making us produce and grow the wealth which they spend?’[3]

Instead of fear and anger, as Thomas suggests, I see in 1381 an immense expression of hope for a better future. It was a forward-looking movement built on the hard work of ordinary people who attempted to build a better life after the ruins left by the first arrival of the plague, Yersinia pestis, in 1348-9. From what we can piece together, the rebels of 1381 were hoping for some form of representative government with the king at its head. They wanted to get rid of lords as the enforcers of inequality and serfdom, whom they saw as corrupt and ‘traitors’ as they stood against what the rebels saw was the true commons, the loyal and trustworthy subjects of the king - themselves. They wanted freedom from the shackles of servitude for their offspring and to enjoy the fruits of the land which they felt should be held in common. They were, by definition, not in favour of the destruction of democratic principles. This might be a more positive message to take from 1381, and one which is thereby wholly and totally at odds with the scene at Capitol Hill, and yet still very relevant for our current time dominated by pandemic fears. 1381 for me is above all about survival and hope for a better future of greater equality and better standards of living for ordinary people.

Posted by Mikeinexile at 4:10 PM